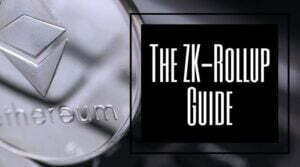 Keep reading to learn more about the ZK-Rollup, the pros and cons, and how it works.

What Is The Issue With Ethereum Scaling?

For a while now, talk of Ethereum’s scaling issues has been discussed in the cryptocurrency world. At their peak, they were only able to handle 14 transactions a second. With over a million people visiting every day on average, that easily became a problem and the blockchain would face delays and problems.

When there were delays due to increased demand, the gas fees went through the roof, causing extremely high fees that made it ridiculous to use sometimes. For those that don’t know, gas fees are essentially transaction fees that users pay to transfer money around. However, instead of one stable price, they adjust based on how much energy the platform has to use to process the transaction.

Because of these issues, Ethereum has been working to find a scaling solution. Currently, there are three main types of scaling options which are

These are the most common amongst all blockchains and platforms when transactions occur. Ethereum primarily uses the PoS method which is considered better, but it is a lot slower, which is where Ethereum is running into issues.

Sidechains work well for general-purpose applications. However, they are less secure since they do not rely on Ethereum’s security and consensus models. Sidechains run parallel to Ethereum’s Mainnet, but on a different blockchain, and have a two-way bridge to connect them. It is still Ethereum and runs like Ethereum, but it is a lot less decentralized.

While not entirely centralized, it is responsible for its security and consensus. It is also often not as secure as the Mainnet of the platform they work with.

Layer 2 scaling is Rollups. They are currently considered the best as you get the security of the Ethereum platform, and they work as more of a general-purpose design than the layer 1 solutions, which were application-specific.

A Rollup is a scaling solution that works by moving transactions outside of the main blockchain while still posting the data for the transactions back to the blockchain. This way, the data is still secured with the main platform, while taking the bulk of the work to a different area.

Currently, there are a few different Rollups, including the ZK-Rollup, which is the one that we will discuss the most today.

ZK-Rollup stands for Zero Knowledge-Rollup and it is located on the Ethereum mainchain. It is called zero-knowledge because it takes the knowledge off of the blockchain and condenses it into one solid transaction instead of several different ones that cause the blockchain to deal with a lot of data at once. Then it sends the proof back to the main blockchain. This proof is known as the Succinct Non-interactive Argument of Knowledge (SNARK).

The transactions are often a lot faster and cheaper when using the ZK-Rollup since a lot less data is included during the transactions.

ZK-Rollup consists of a two-layer solution. The first layer of the solution is when a transaction is moved from the Ethereum mainchain. Then it is moved to a different, secondary chain which is layer two. There are a few different Layer 2 solutions out there, but Rollups are the most popular because they allow a lot more transactions per second without risking security or decentralization.

These work well for large platforms like Ethereum because it offers cheaper and faster transactions by solving the scalability issue that many transactions at once create. However, though it has faster transaction times, it does have a delay in withdrawal times. This is so that the users and the program can search for any fraud.

Short for zero-knowledge rollups because they require “zero-knowledge” of a transaction in its entirety on the Ethereum mainchain. This allows for more transactions to occur at once without requiring the high amounts of processing power that usually causes the platform to slow down.

It also doesn’t have a lot of security issues, as you would expect with items being moved away from the blockchain. This is because users, which are the ones that create the rollups, are in charge of searching for fraud. If they do not report the truth, they risk their stake in Ethereum (ETH) being slashed or cut, so people are incentivized to operate honestly.

There are a few platforms under ZK-Rollup

What Is The Difference Between ZK-Rollups And The Other Rollups?

Optimistic Rollups work by posting data to the first layer. It is called Optimistic because the rollup essentially just is optimistic that the data is valid and that nothing else has to be done. This works out well when things do work well because it doesn’t have to do any additional work.

If it isn’t valid, then any of the users can submit information on it being fraudulent. They also try to incentivize people to not make fraudulent transactions. Then the transaction has to go through a whole process of investigation. If it is found to be fraudulent, the party that makes the false transaction is often punished by slashing ETH bonds.

It is supposedly so effective that even if there was only one person online monitoring for fraudulent transactions, it would still be an effective system.

Arbitrum fell a little to the wayside when Optimistic and ZK came to the forefront, though it initially looked promising. It was fairly launched and had a well-developed ecosystem that allowed them to work with a lot of DApps instead of focusing on transactions.

Like the other Rollups, they had low fees and provided a lot of incentives for their validators. It also has a lot more security as it pulls from the Ethereum blockchain and provides its security.

Where Optimism lets its users search for fraud, Arbitrum breaks the data into small chunks and sorts through it a little at a time. Though it allows a lot more transactions, fraud detection can take a lot longer.

ZK-Rollups also likes to make sure that their users are being truthful, instead of taking them in good faith such as Optimistic Rollups does. Its proof validation is complicated and time-consuming, a lot like Arbitrum. However, there is no challenge period like with Arbitrum, so withdrawals can happen much faster.

What Kinds Of Users Use ZK-Rollups?

There are two types of users when it comes to the ZK-Rollup plan. These are transactors and relayers.

Transactors are the ones that create the transfers and broadcast them throughout the network. These are the people that make the various transactions that later get changed into ZK-Rollups.

Relayers are the ones that work to rollup the data and transfers that were created. They create the SNARK proof that goes back to the main blockchain. To become a relayer, one simply has had to have staked the required bond in a smart contract. This is to make sure that relayers aren’t tempted to tamper or withhold a rollup.

Coins on the Platform

ZK-Rollups are only on the Ethereum blockchain. Because of this, there are only a few coins that work with the Rollups for viable processing and transactions.

ZK-Rollups and other rollup software are still new and have a lot of work to do. Some people worry that though it boasts it is as safe as the main platform, we haven’t seen proof that it is that secure yet, and there may be security holes we aren’t aware of.

Others are upset that the premise removes a lot of the benefits of decentralization and makes it a more centralized system.

However, they can’t deny that it vastly improves the usability of the Ethereum blockchain and allows for more transfers and users at once, while also reducing costs and speeding up transfers.

As with any part of growth and expansion, some tweaks need to be figured out, and we won’t be able to see the full strength or weakness of the rollups until it is fully tested out with hacking. But it is a step towards making cryptocurrency more accessible for everyone.

John S. Logan has been working with cryptocurrency for nearly as long as it has been available on the market. With a professional background in the finance industry, he believes that blockchain technology, cryptocurrency, and decentralized finance play an important role in the future of the world.