What is a blockchain? Merriam-Webster defines it as a digital database that stores information “that can be simultaneously used and shared within a large decentralized, publicly accessible network.”

Blockchain is also described, in the same definition, as also being the term to describe the tech needed to create and maintain the database. 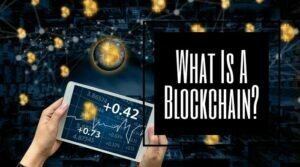 Cryptocurrency, including Ethereum and Bitcoin, rely on blockchain operations. Essentially a blockchain can be viewed as a compilation of transactions. Every time you send or accept crypto, there is a record of the transaction in a blockchain network.

And while one of the appeals of crypto is the ability to buy and sell without a middleman like a card issuer or a lender, there are plenty of groups, projects, and companies that have set up shop in the cryptocurrency space acting as the very middlemen crypto is said to eliminate, at least when viewed from a certain perspective.

A Brief History Of Blockchain

Many point to 2008 and the person known as Satoshi Nakamoto as the start of the blockchain story. But Investopedia points out that the concept was proposed as part of a 1991 research project by Stuart Haber and W. Scott Stornetta.

Investopedia reports the pair wanted to create a system that had unassailable time stamps–something that could not be forged or meddled with. But as history would have it, that concept would take another twenty years or so before seeing the light of day.

Early issues that needed to be dealt with included the idea of preventing someone from using their crypto keys multiple times to spend the same coins again and again. It also had to deal with the ever-expanding database of information associated with all the potential transactions that might add to it over time.

The simplest way to visualize how blockchain technology works is to think of it exactly like an accounting ledger–all transactions are recorded for the record. Pros of this include the ability to send a secure payment without exposing personal data.

You don’t have to use an exchange or third-party platform to exchange crypto but there are plenty of services out there offering to help facilitate your transactions.

Blockchains can be used all over the world, they are considered “open” meaning that at least in concept these transactions can be viewed by anyone. They are also completely decentralized and not maintained by a single entity.

When using blockchain technology you have access to the distributed ledger and the immutable records–each transaction is recorded one time and in cases where a transaction record has a mistake it is required that a second transaction be added to eliminate the original mistake.

Transactions are facilitated by smart contracts, which are rules stored on the blockchain designed to speed up transactions.

Every transaction on the network is recorded as a block, hence the name “blockchain”. Every block is associated with the ones before and after. You could view blockchain as a “chain of custody” record since the blocks record all the relevant data associated with a crypto transaction.

When you buy, sell, or exchange crypto you contribute to the blockchain’s record of transactions. Users manage their cryptocurrencies via unique addresses requiring the buyer to use a public and private crypto key.

Spending your money means using the private keys to your currency, signing a transaction and closing the deal. You must store these keys in a secure place because losing the keys is identical to losing your money.

People store their keys in many ways including on exchanges you can sign up for to buy, sell, and trade crypto. Some keep them in hardware wallets, some store them in the cloud, and some even resort to writing down the keys and keeping them in a safe location offline.

What You Should Remember About Blockchain Tech

Blockchain is the record of transactions, cryptocurrency is the money spent to make those transactions happen. Security of your private crypto keys is paramount–lose the keys and you lose your cash.

Cryptocurrency is at press time still largely unregulated in the United States. While more retailers and credit card companies are gravitating to cryptocurrency there remains a big question mark about whether current tech including blockchains would be negatively affected if the U.S. begins regulating crypto and the associated technology (including blockchains) in a serious way. It’s likely best to consider formulating an exit strategy related to your crypto investments that anticipates the United States government beginning some form of regulation in the cryptocurrency space.

Remember, blockchain tech isn’t just about storage–people mine virtual currency on the blockchain and that can create an environmental impact thanks to the power consumption needed to do the mining. That too could be subject to federal regulation and it’s wise to expect future laws regarding both the use of and the mining of Bitcoin, Ethereum, etc.

Cryptocurrency relies on the good faith and enthusiasm of those investing in it. It is similar to the U.S. dollar in that way–you cannot walk into a bank and trade a 20 dollar bill for the equivalent in gold. Nor can you do that with Bitcoin.

What makes the two different? The federal regulation and control of the American dollar as currency, and the view of the Internal Revenue Service that cryptocurrency is property and not cash. It is taxed and regulated accordingly, such as the regulations are.

Federal regulation of crypto may change that, and smart investors will want to carefully monitor federal attention on Bitcoin and others to see which way those particular legal winds may be blowing in the future.