What is cryptocurrency? If you are new to investing in general you may face a steeper learning curve than someone who understands investment finance but isn’t familiar with this particular flavor of investing. 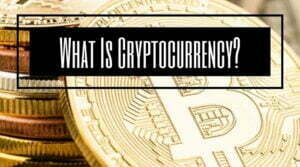 What do you need to know about cryptocurrency as a newcomer to both investing and digital currency like Bitcoin, Litecoin, Dogecoin, etc.?

Cryptocurrency is essentially an unregulated form of digital currency. The most popular cryptocurrency at press time is Bitcoin, which also has the highest value of any digital money in the marketplace not backed by fiat currency.

Bitcoin is credited with having started all this back in 2008, followed by Ethereum and others including Litecoin, Dogecoin, and Bitcoin’s forked Bitcoin Cash.

Cryptocurrency’s unregulated nature makes it a purely speculative investment, depending on the good faith of the marketplace and investor enthusiasm to sustain its value. Is that value overinflated or unrealistic?

It depends on who you ask, but never forget that the unregulated nature of this type of investment means that it’s possible to lose your investment quickly and without warning. There are no safeguards against such losses and there is no deposit insurance to protect you should you lose your funds.

Cryptocurrency loses value when it loses investor confidence. That is true of other investments, too but Bitcoin and the rest depend completely on that confidence as there is no real-world value behind Bitcoin or others that don’t enjoy the backing of real money, also known as fiat currency.

The Mechanics Of Cryptocurrency

You can buy, trade, or earn Bitcoin and Ethereum. You can mine it, you can play games or watch promotional videos to earn it, and you can swap it for goods or services.

But to do any of these things, you need a way to store your currency (the “digital wallet”) and safeguard your private cryptocurrency keys. You can use an app, you can join an exchange (and/or use any app provided by that exchange) or you can simply write down your keys and store them physically.

Ever heard of a “bearer bond”? This financial investment is a bond that literally pays out to whoever physically presents the bond for redemption. The “bearer” of the bond gets the payout. Crypto keys are a bit like this in that if you have those keys, you essentially have the money. Whoever possesses those keys gets to use that digital currency.

If yours get stolen, you’ve lost your investment.

The Appeal Of Cryptocurrency

The thing that makes cryptocurrency appealing is also the same thing that makes it dangerous. It is a decentralized currency, there is no government, no middleman, or third party necessary to make a transaction happen.

As long as the selling or transferring party has their private crypto keys that represent the number of coins they possess, those keys can be transferred (and yes, also stolen) to someone else.

You do not need a bank or a lender to make crypto transactions happen though many people commonly use crypto exchanges and apps to help track and manage their digital assets.

If the legal tender question is essentially a concern that Bitcoin and other digital currencies may or may not be accepted as a form of legitimate payment, the answer is basically no, with certain exceptions.

Some nations have made headlines announcing flirtation with making some form of cryptocurrency an officially recognized form of legal tender. One in particular actually pulled the trigger on this, albeit to some protest from the U.S. government.

A September 2021 report from National Public Radio notes that Ecuador is the first country to do so; the same NPR report notes that the U.S. Embassy there issued a statement that doing so undermines democracy and “…erodes El Salvador’s international image as a democratic and trustworthy partner in the region.”

Security is in the eyes of the beholder. Time Magazine reports that thanks to the blockchain technology “backing cryptocurrency is inherently secure, thanks to the decentralized — and public — nature of distributed ledger technology and the encryption process every transaction undergoes”.

But that doesn’t address all issues–just the ones associated with a hacker attack on a blockchain, crypto exchange, etc. Security isn’t related just to cybersecurity, passwords, your private crypto keys, etc.

There are also dangers such as market volatility, the risk of identity theft or other forms of fraud that could result in having your crypto keys stolen, etc. The key is to protect yourself by safeguarding the crypto keys AND having an investment strategy as a hedge against the previously mentioned problems of volatility and other problems.

Before committing funds to any investment, it’s a very good idea to research the providers, the exchanges, and the nature of the investment opportunity itself. You don’t want to make assumptions about how the marketplace works only to learn the hard way (which is often the expensive way) that your assumptions were untrue in the crypto world.

Assume that people are trying to hack your crypto keys or steal your private data and protect yourself accordingly. You should have redundant storage for your private keys, you should create an exit strategy to cut your losses in case your chosen digital currency experiences a sudden drop in value, you’ll want to actively monitor your investments to avoid nasty surprises.