The history of cryptocurrency isn’t long compared to that of more traditional trading or investing options. But within that short amount of time, quite a bit has happened. Since the earliest days of the idea, the fascination with decentralized finance, digital money, and borderless trade has grown at an incredible rate. 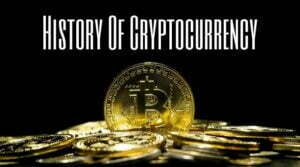 What is the earliest version of cryptocurrency? If you said “Bitcoin” you’d be wrong by about twenty years.

One of the earliest versions of virtual cash is attributed to the Netherlands, which experienced a retail theft wave at gas stations there in the 1980s. Carrying a smart card instead of cash was a radical idea back in the 80s, but according to Bitcoin Magazine, that was the solution used to curb the threat of retail theft.

Closer to home, the concept of “blinded cash” was being developed by a cryptographer who wanted to create a form of virtual currency that could be transferred between two parties in a very similar manner to the methods used today, albeit with far lower computing power available.

The similarities extend all the way to the anonymity enjoyed by crypto-traders today. This innovation was called Digicash. It died in 1988, but the idea was waiting for another to give it a try.

Digicash made an impression and the startup dot-com bubble had not really gotten underway yet (1995 is around the time things really heated up in the tech sector) but there were startups with an eye on trying the Digicash idea.

Enter PayPal, which did not create a cryptocurrency but DID manage to facilitate and normalize online payments between two people who didn’t want to use cash. PayPal partnered with eBay and the rest of that particular chapter is history.

At least one source acknowledges other innovators including one platform that wanted to be the PayPal of gold investing. That effort was known as “e-gold”, and was ultimately shut down by the government in 2005.

Three years later, a white paper was written by “Satoshi Nakamoto”, which many assume to be a pen name for an individual or collective.

2008 is the year of the economic recession. It’s also, as mentioned above, the same year the person or group calling themselves Satoshi Nakamoto authors the white paper discussing an electronic virtual currency operating in a decentralized, unregulated way.

That paper, titled Bitcoin: A Peer-to-Peer Electronic Cash System was the shot heard ‘round the world, so to speak. The very next year marked the creation of what some sources describe as the “Genesis block”–the very first block of the Bitcoin network and the start of a new revolution in payments, decentralization, and independent investment.

The First Purchase of Cryptocurrency

After the basic concept, infrastructure would be needed to facilitate the buying, selling, and trading of crypto. The idea of an exchange isn’t quite in keeping with the central theme of cryptocurrency (at least for some) as a totally third-party-free way to buy and sell.

But exchanges were necessary if for no other reason than to make the world of cryptocurrency less dependent on specialized knowledge and more user-friendly.

The development of a platform or exchange in which to make these crypto transactions happen is similar to the development of graphical user interfaces and operating systems that make computers more user-friendly. The end result of catering to a less tech-savvy user?

It facilitated the very first Bitcoin purchase–the trading of Bitcoin for a tangible good. In this particular case the purchase was a pair of pizzas. That was accomplished in 2010 with 10,000 BTC which at the time equaled roughly $20 at current-at-the-time market prices.

After the advent of Bitcoin, no one was surprised that others wanted in on the new opportunities posed by cryptocurrency, and in 2015 Ethereum launched its own network and rose to become a serious challenger to Bitcoin–perhaps (hindsight being 20/20) not as competitive on a price point, but rather the scale and ubiquity of Ethereum.

And thousands of cryptocurrencies later, between six and ten thousand different types depending on which source you read, there is plenty happening in the world of crypto to keep things interesting.

The evolution of practices such as coin mining, coin burning, crypto drops, NFT drops and others have kept this technology moving forward into the world of collectibles, art projects, and much more.

The Future Of Crypto

There are plenty of technological issues that can affect the future of cryptocurrency; there are also issues related to the ability to invest in the arena of Exchange Traded Funds. In 2021 the Bitcoin ETF bowed in on the New York Stock Exchange, and that’s a significant development in the eyes of those who want to see crypto more accepted into the financial ecosystem.

But the elephant in the room when it comes to the future of crypto is the issue of regulation. American lawmakers including those at the Internal Revenue Service are discussing ways to regulate cryptocurrency including how it may be taxed. In 2021, taxation of crypto was done with the view (the IRS’s view) that cryptocurrency is property and not cash.

But other countries have lawmaking issues with crypto. China banned all cryptocurrency transactions in the country in 2021. That move did affect the value of certain coins including Bitcoin which saw its own valuation temporarily dip to below $32,000. That cause-and-effect should be taken as a warning to those who want to invest but have lower risk tolerance.

And while Federal Reserve Chairman Jerome Powell was quoted by multiple news outlets claiming that the United States had no interest in banning crypto, regulatory oversight is not necessarily out of the question based on comments made by other federal regulators such as reps from the SEC.

If you are considering investing in crypto or have already done so, it’s a good idea to pay close attention to the regulatory part of the virtual currency conversation in the media, on crypto exchanges, and places where investors gather.

Depending on the laws passed or even based on laws considered but not passed, investor reaction to such developments will go a long way toward defining what could happen next in terms of valuation and availability. Remember, digital currency trading and speculation is highly risky at the best of times and any investment that is subject to the whims of social media (in terms of value) is going to require a bit more attention than a long-term buy-and-hold stock or bond investment.

For best results, it’s important to view crypto investments in a more involved way than set-and-forget.