What is Bitcoin dominance? Bitcoin (BTC) dominance is a measure of how much of the total market cap of crypto is comprised of Bitcoin versus alts (every other token). It can help understand the trend of BTC and alts.

Bitcoin is the world’s largest cryptocurrency by market cap and commands a large portion of the trading volume in the cryptocurrency markets. Bitcoin is the third-largest global currency (digital or not) and may be number one some day. And while these statements have its critics it’s a good indication of what it means to have dominance in terms of brand, staying power, and investor confidence. 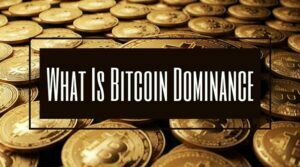 If you are new to cryptocurrency you might not remember a time when digital money was a commodity with relatively few options. But since the advent of people experimenting with currency as a digital commodity, one type of crypto has risen to a very large share of the market. Bitcoin.

The other fundamental reality of trading in crypto at the time of this writing? Bitcoin does indeed dominate the virtual currency market. Let’s look at some cryptocurrency prices that were posted on a single day in October 2021:

What Is A Bitcoin Maximalist?

Bitcoin Maxis believe that BTC is the only digital asset that will be needed in the future. Maximalists believe that all other digital currencies are inferior to Bitcoin.

In 2016, Vitalik Buterin, founder of Ethereum, commented that bitcoin maximalism is:

“…the idea that an environment of multiple competing cryptocurrencies is undesirable, that it is wrong to launch ‘yet another coin,’ and that it is both righteous and inevitable that the bitcoin currency comes to take a monopoly position in the cryptocurrency scene.”

What You Need To Know About Cryptocurrency Trading

At least, for the time being. Digital currency trading is a kind of speculation. Unlike commodities such as gold, livestock, oil, or even orange juice, there is nothing of value that backs cryptocurrency.

That makes investing in it as risky as commodities trading at best and there is a substantial risk of loss when you invest in a basically unregulated wild-west type of trading environment like crypto. Some might snarkily add the words of infamous gonzo journalist Hunter S. Thompson here, “There is also a negative side”.

Sarcasm aside, if you want to invest in cryptocurrency there are two basic realities to contend with at the time of this writing. One is that an unregulated currency that has no actual real-world value aside from investor enthusiasm is a market that one day will likely experience major corrections.

When those corrections come is a mystery, but they are waiting to happen. Smart investors acknowledge this and plan accordingly.

Bitcoin Was Not The First Cryptocurrency

Some assume that because Bitcoin is so popular, it must have started the digital investing craze. But it did not. Investopedia reports some twenty years prior to the advent of Bitcoin, gas stations in the Netherlands had problems with overnight theft. That issue prompted the experimental use of smart cards that replaced cash–with those vendors.

Another attempt around the same time involved the use of “token currency” instead of cash in ways that seriously predated Bitcoin. That effort was known as DigiCash and used a form of encryption as part of the transactions. That company went bankrupt in the late 1990s, but it was a foreshadowing of things to come.

Circa 2009, Bitcoin was developed after a number of other companies attempted to usher in their own versions of crypto with varying degrees of success. It is described by Bitcoin.org as “…a consensus network that enables a new payment system and a completely digital money. It is the first decentralized peer-to-peer payment network that is powered by its users with no central authority or middlemen.”

Since 2009 Bitcoin has increased and decreased in value like any commodity might but there have been complicating factors owning at least in part to the decentralized and unregulated nature of crypto investing.

The Future Of Crypto – Is It Bitcoin?

Bitcoin dominates the marketplace of virtual currency for multiple reasons–it is the most highly visible crypto where popular culture is concerned, and that helps.

But it is also a virtual currency that investors tend to hang onto longer–those who buy Ethereum may hold on to their coins for about a year and a half, where Bitcoin buyers keep their coins for double that time or longer.

Some believe that Bitcoin will eventually absorb or eliminate much of the competition in the virtual currency space, while others are betting on Ethereum to eventually do the same thing instead of Bitcoin.

There are so many digital currencies available now that speculating on the survival of any of them may be a tricky thing to do. Some countries and businesses have made moves to embrace crypto but in more regulated ways. How long the wild west environment that is operating for crypto investors now persists remains to be seen.

There are three major factors at work that can influence which way crypto in general and Bitcoin in particular could go in the future. It is highly likely that due to brand influence alone, Bitcoin could wind up keeping the top slot.

But federal regulators may be keen in an election year to make political hay out of an issue they likely fail to understand properly and that’s a variable smart investors pay attention to.

But the third factor is also a variable–how long before Bitcoin experiences a more severe market correction than the ones that have occurred along the way to date? Elon Musk’s ability to influence the value of a highly traded commodity with a mere Twitter post should be enough to make any investor leery of over-leveraging in digital currencies.

And until we have seen a true market correction–one that mirrors the nature and severity of things like historic stock market crashes–we are likely not to be able to know one way or the other whether ANY of the virtual currencies will survive.

Bitcoin HAS seen corrections–the most severe was a loss of approximately 28% of its value. But as some sources including blockchain company Argo point out, that correction “wasn’t even in the top ten of all time. In fact, there were over six major corrections during the incredible bull market of 2017”.

Bitcoin dominance is a force to contend with in the meantime. If you want to invest in crypto and have an eye on the biggest name in the virtual investing ecosystem, Bitcoin is definitely the team to join…or beat.