What is the difference between fiat currency and cryptocurrency? The basic differences include what adds value to the currency and whether or not there is real-world value attached to it. 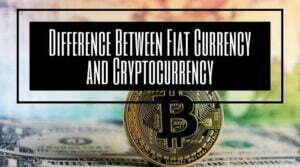 Britannica.com defines the term fiat currency as any money recognized as legal tender by a government. Legal tender includes paper money and coins that have value not inherent in the materials used to create it.

In other words, if you have legal tender that comes in the form of a gold coin, the raw material–gold–means the money has inherent value. But paper money has a face value that may be worth more than the sum total of the materials used to make it–that is fiat currency, too. It is recognized by a government and therefore subject to some form of regulation.

Cryptocurrency is not the same as fiat currency for this reason–it is largely unregulated and does not have the official backing of a government (generally speaking). There are some isolated examples of countries that have flirted with cryptocurrency but at the time of this writing?

The Backing Of A Central Government

There is no cryptocurrency in its purest sense (meaning we aren’t talking about stablecoins here) that has any inherent value either present in its materials (cryptocurrency is digital and has no physical presence aside from a few gimmicky “coins” sold as physical representations of Bitcoin or other digital money) or thanks to the support of a major government or regulatory body.

Cryptocurrency relies exclusively on the enthusiasm of investors for its value. There is no FDIC insurance on cryptocurrency, the IRS does not recognize crypto as money but rather as an asset, and the places you can buy, sell, and trade Bitcoin, Ethereum, and others are limited to those who are participants in the digital economy.

And the list of participants in that economy is growing including Paypal, Square, and other major names in the online retail ecosystem.

Why Fiat Currency Is Better Than Crypto

This may sound fairly obvious, but fiat currency has the protection of a central government. As legal tender, any currency may be subject to inflation, conditions that lead to a recession, competitive trading for or against the currency in the global marketplace, etc.

Fiat currency is subject to government regulation that can help prevent artificial over-valuation of the currency and prevent the currency from becoming devalued due to inflation. Not every government chooses to or is capable of regulating its legal tender properly but at a minimum, fiat currency has more potential controls to prevent crashes and overvaluation.

Not so with Bitcoin and other digital money–investor enthusiasm can serve to artificially drive up the price of Bitcoin and others–look at what happens when famous Bitcoin speculators and pundits weigh in on Twitter about the state of a certain coin.

Elon Musk’s ability to seriously affect the value of Bitcoin with a single tweet should tell investors everything they know about the inherent risks in investing in virtual currencies.

If you buy crypto at one price on Monday and by Friday it is selling at a completely different price, you’re watching the whims of the investors at work and without any checks or balances on how high or low the new valuation might go.

Why Does Bitcoin Have Value At All?

And that’s the essence of cryptocurrency in a nutshell–the coins have value as long as someone is willing to pay the market rate for those coins or accept those coins in exchange for goods and services at the current market rate.

Unlike gold, once investors have tired of a certain type of digital currency or it seems to have outlived its utility, the value of that coin may plummet. But as long as there is sufficient excitement among those who buy and sell crypto you may be able to continue using a given currency.

Do you remember the Ty Beanie Baby craze from the 1990s? The New York Post reports that the Ty company responsible for the craze earned a whopping $6 million by 1992 thanks to specific types of marketing, hype-building, and strategic scarcity (retiring popular Beanie Babies and creating artificial demand by doing so). Many people jumped on the Beanie Baby bandwagon.

So many jumped on it that certain editions of these little stuffed animals sold for literally thousands of dollars. For example, the following editions were priced at one time (according to Google):

What are these stuffed animals selling for today? On eBay a Halo the Bear toy sells for under $20. That doesn’t mean there aren’t sellers still trying to eke out a profit-some try to sell their editions of Halo the Bear for between $6k and $8K.

Buying and selling crypto may work out in a similar fashion depending on circumstances–what does the future hold for Bitcoin and the rest? Much depends on whether cryptocurrency continues to be an unregulated currency not supported or used by major governments and retailers.

The major retailer portion of the journey is already happening–but what happens if governments begin to step in and start regulating Bitcoin? That could create a major change in the perceived value of the currency and its future as a tradable investment.