What are smart contracts? The uninitiated might assume that this term refers to some sort of legally binding paperwork, but in the world of cryptocurrency a smart contract is code described by some sources as a “self-executing contract” which is literally put into computer code as an agreement between crypto buyers and sellers. 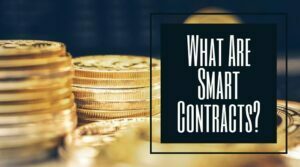 A smart contract is responsible for storing the details but also executing the agreement over the blockchain network. Smart contracts are described as “trackable” and there is no “undo button” for them–once the contract is executed, that’s it.

What Do Smart Contracts Permit You To Do?

Smart contracts can let you set up recurring payments (does that sound like the old familiar ACH transfer to you?) That’s not a bad analogy, but the smart contract technology is more versatile. How?

For example, let’s say you want to participate in the purchase of a hypothetical NFT that requires four equal payments. While its understood that NFT purchases may not typically be that complicated (one-time payments are the most common) it is possible to set up such a recurring payment for an NFT using a smart contract.

How you arrange the contract determines how the transaction will proceed. For example, if you agree to buy an NFT in four equal installments of X number of Ethereum coins or tokens, you can also set up a delivery date for the NFT.

Let’s say the creator agrees to deliver the NFT after the final payment, but in reality the NFT is “delivered” early.

Using the system for such transactions has benefits–the entire process is decentralized, there is no single person controlling the money or the delivery, and once the smart contract has been set up it cannot be altered. It’s irreversible, which may be a pro and a con at the same time depending on circumstances.

Best of all for some, the smart contract allows 100% anonymous transactions due to the decentralized nature of this technology.

Smart contracts use a simple set of instructions to make these transactions work. How simple? “If/then” and “goto” type code. The contracts can be designed to work when certain conditions are met–you sending crypto coins to a seller, making an NFT available, etc. and according to some sources, smart contract templates are becoming popular with those who can’t write their own code to make the process work.

Once the programmed conditions are met, the smart contract code executes the transaction automatically and everything is encrypted as part of the blockchain transaction record.

Remember that each transaction is connected to the one before it, which is one of the reasons why blockchain networks are considered more secure–the architecture of the network is one of the keys to its security.

Not Just For Cryptocurrency And NFTs?

There are many uses for smart contracts. IBM Blockchain is one example of a major industry player using blockchain network technology including smart contracts to create and sustain an “ecosystem of trust for global trade”.

IBM uses a platform incorporating a blockchain in part to “reduce friction and risk while easing the trading process and expanding trade opportunities for participating companies and banks,” according to the official site.

Another major company, Home Depot, uses smart contracts as a tool for dispute resolution with its suppliers/vendors.

All of the above sounds firmly based in a sort of “future-now” sort of technological state, but it’s not all utopian safety and security.

One vulnerability of smart contracts? The notion of “garbage in/garbage out”. In this context that refers specifically to the possibility of errors in the coding of the contract–if a programmer isn’t as skilled as they need to be or if there is simple human error in the mix, flaws in the code could potentially compromise the contract and its execution.

Another potential flaw for some–the same thing that makes the process strong can also leave its users bereft of recourse should a dispute arise. When you have a paper contract that is breached by one of the signers you can take them to court and try to get relief through the legal system.

But smart contracts aren’t designed for any of that. Getting a resolution from a dispute associated with blockchain technology is fairly undiscovered country at press time, and while there certainly have been situations where a dispute was likely or actually occurred, there isn’t really any legal precedent over what can or should happen in such cases–at least not at press time.