What are gas fees? The term refers to a type of service charge associated with blockchain transactions. Those who buy, sell, and trade Ethereum become quite familiar with these charges–Ethereum’s gas fees are a typical part of doing business with that cryptocurrency.

The term “gas fees” is shorthand for these costs since these fees act as the “fuel” for the transactions. These fees serve multiple purposes including deterring spam and frivolous or harmful use of blockchain technology. 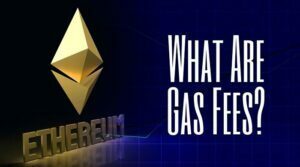 Depending on circumstances you may be able to take advantage of one feature of gas fees–paying more in fees can speed your transaction under the right conditions. If that sounds like we are implying that gas fees are not standardized or even stabilized, you are correct. Some sources refer to gas fees as “dynamic” charges and they are subject to volatility or change.

Gas fees can be charged for cryptocurrency transactions, but also for NFTs, which makes creating NFT artwork and listing it for sale publicly tricky if you aren’t familiar with the costs and when they are levied.

Ethereum users know that “gas” is basically a unit of measure; it refers to the computer power needed to verify a transaction and add it to the blockchain. Gas fees are charged for a transaction of any type including transferring Ethereum from one wallet to another, creating or selling NFTs (as mentioned above), and other actions.

Ethereum requires gas fees be paid in its own coin of the realm, so to speak (Ether), and prices are listed as units of “gwei” which is equivalent to 0.000000001 ETH, according to several sources. Gas fees are subject to change and you can monitor the ups and downs of these fees via websites such as ethereumprice.org.

And what kinds of ups and downs? For example, if the value of Ethereum changes, typical gas prices may be adjusted, too. It is important to note that the price of gas may change at any time, the amount of gas required for each transaction is fixed.

But users can protect themselves after a fashion, by establishing a gas limit that indicates how much you are willing to pay for such fees at a given time. This can help you establish a “guard rail” to protect you against escalating costs.

Ethereum changed the way it calculates gas fees in late summer 2021. The “London Upgrade” was meant to introduce more stability in this area. The upgrade also added a “burn” feature that is meant as a backstop against the creation of new coins since Ethereum does not have an upper limit for how many tokens or coins can be minted on the network. Thanks to this burn feature, each block in the Ethereum blockchain gets a basic fee based on supply and demand for space. The fee is “burned” or destroyed as part of the verification of the transaction.

According to Ethereum.org, the burning of the base fee isn’t the only issue to keep in mind. Ethereum.org states, “users are also expected to set a tip (priority fee) in their transactions” which is used to reward the Ethereum “miners” facilitating transactions on the blockchain.

That means the formula for computing the gas fee includes the following:

The bigger the tip, the more priority a specific transaction may have–there are cases where you may wish to make a bigger tip to get the elevated priority but not all transactions will warrant a bigger tip–you can prioritize your buying, selling, or exchanging in this way.

Before the London Upgrade, Ethereum had fixed-sized blocks, which made transactions potentially slower than the post-upgrade variable-sized blocks used at press time. Those blocks can vary in size based on supply and demand up to an established limit. Gas fees can increase or decrease based on this supply and demand and how it affects the block’s size.