What is proof of staking? This crypto term refers to an act of using your virtual currency as a “stake” or collateral in the blockchain validation process. The blockchain and crypto, in general, are fully decentralized and depend on “consensus” mechanisms to validate transactions and store the associated transaction data within individual blocks. 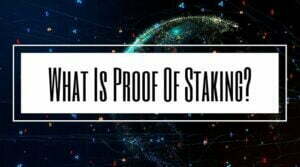 The transaction validation process is crucial to the success of the entire blockchain to prevent hacking, abuse, spam, etc. and there are multiple ways to perform that validation including proof of work, which some including Ethereum are moving away from in favor of proof of staking.

How Proof of Stake Works

As mentioned above, there is a need to validate transactions on the blockchain, and proof of stake is one of those methods. A cryptocurrency owner can pledge their coins as collateral to keep the process honest.

When you stake your coins, they are held or frozen and cannot be used. This is the part that keeps the validation process honest.

The act of mining cryptocurrency can require a huge energy spend for the person who owns the hardware. It’s a decidedly non-environmentally friendly practice and the validation process known as proof of work adds to this power consumption.

Proof of work was the pioneering method to validate and it’s not surprising that this method is flawed from an environmental point of view. This approach requires complex computing to solve problems. Proof of work forces the Bitcoin miner to pay the costs of computer hardware, plus the electricity needed to run the validations.

Under proof of stake, the cost for doing the validation work is the amount of coin you put up as a stake. You are then competing for the change to perform the validation.

That’s different than proof of work where multiple people might be working on a single validation at the same time with only one “winner”.  Imagine a large number of computers all competing to solve the same validation problem, 24/7 around the world. That is definitely a large expenditure of electricity with an outcome for only one validator.

With proof of stake, you are “awarded” a validation and if you correctly validate the transaction you are rewarded with virtual currency. If you validate in error, you lose some of your collateral.

The going wisdom is that you want to bring a lot of cryptocurrency to the table, so to speak, if you want to be assigned validation tasks to earn virtual currency.

It’s true that anyone with any amount of coins to stake could technically be in the running for validations, but the bigger your stake, the more seriously you are taken in that area. Your likelihood of being selected as a validator goes up the more coins you stake.

But you do not have to go it alone in this venture–one of the innovations regarding proof of stake involves the cryptocurrency version of the carpool.

A staking pool is where a group of people operate under one “umbrella” (our term) to compete for validation projects. The creator of the pool is the face of the group and sets up the basic structure of the pool including any minimum staking requirements, etc.

The group has more coins collectively and therefore a better chance of being awarded validation tasks. Any returns are split amongst the members as per their agreement.

There are many who are keen on replacing the energy-hogging proof of work with proof of stake. Even Elon Musk has gone on the record with reservations about the energy expenditures associated with those using proof of work at press time–including Bitcoin.

The proof of stake process has been adopted by Ethereum and that is a major development in the space. There are plenty of others who have also moved away from proof of work and into the more sustainable proof of stake.

Others using proof of stake include: