What is Proof of Work or PoW? This crypto term is technically defined as a requirement for parts of a network to show proof that certain operations have taken place in a distributed or decentralized way. These operations are essentially complex computer problems that must be solved to validate data on the network. 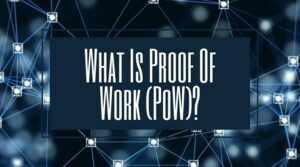 One reason proof of work exists is to prevent hacking, attempts to game the system, etc. It’s a way to achieve “consensus” among the decentralized users to prevent spam, hacking, and other abuses of the network.

But the technical definition doesn’t really help a newcomer visualize what PoW is all about. To help illustrate this, we’ll take the best-known example, Bitcoin, and see how Proof of Work functions in that network.

What Is Proof of Work?

Bitcoin is a virtual currency that is mined or minted using blockchain technology. The blockchain has a record of all transactions that anyone can view, but no personal data is required to be entered. One of the reasons for the record is to prevent crypto investors from double-dipping or using the same private keys to spend or use Bitcoin twice.

The blockchain record is widely distributed and as such acts as a firewall against counterfeit transactions or work.

This system is meant to detect attempts to fraudulently use the network using “hashes”. Investopedia defines hashes as, “a mathematical function that converts an input of arbitrary length into an encrypted output of a fixed length”.

The result of this includes maintaining a hash of the same size no matter how large the original file was when it was created.

The way hashes protect the network? When you submit a particular piece of information it generates a unique hash. Any tampering with the original data results in a completely different hash. It’s a one-way street, and the original information cannot be retrieved via the hash, it only verifies that it’s the same one expected.

It would be very easy to create a hash and leave it at that. But for Proof of Work, there is a built-in level of difficulty making it harder to create the hashes. This difficulty level results in the need to “mine” Bitcoin by adding an acceptable hash to the network every so many minutes. It’s harder to generate hashes by design.

Validate the hash and you can generate an acceptable PoW. But the trick is that it’s not one hash “problem” to solve per user.

Multiple users can be working on the same hash at the same time, and whoever solves the computational problem AND gets randomly selected in a sort of hash lottery (based on the volume of computational work and other factors) is the one who gets to submit Proof of Work and get credit for the operation.

The difficulty level of Proof of Work computations can be adjusted. It can be set higher if the volume of blocks created gets too high, or lowered if there is a reduced amount of blocks added to the network. An adjusted difficulty level is one way to create a firewall against hack attacks directed at the blockchain.

Most of the virtual currencies that are based on or forks of Bitcoin use Proof of Work, but not exclusively. Some of the non-Bitcoin coins using PoW include: