Reimagined Finance is designed to be an easy entry point into the crypto and smart contract world, eliminating many of the technical barriers and steep learning curves that often plague DeFi spaces. This makes it easier to earn rewards without the complexities of the token market since all that is taken care of. You don’t have to worry about finding opportunities, bridging, swapping, farming, and so on, it’s all left to the REFI treasury.

The cryptocurrency space can be complex enough, but now that it’s evolving more and more each day, blockchain technology has already changed so much from when bitcoin paved the way with digital asset storage. This means it can be incredibly intimidating for those new to the space to get involved, and the saving and investment potential ReFi brings may be lost. 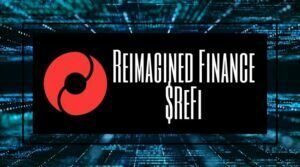 For anyone on the Ethereum smart chain, ETH, or the Binance chain, BSC, there is now an easy way to not only invest in farming but also to have your investments automatically managed. Earnings from your deposits are automatically dropped into your wallet, after being automatically swapped for either ETH or BSC.

REFI is a way to invest in farming without having to learn the often technical and difficult material needed to bridge the learning gap. The learning curve is what often keeps people away from the concept of decentralized finance, by making the REFI token itself the means of diverse investment and farming profit-sharing.

You don’t need to worry about tracking the latest opportunities or growth leaders, REFI does that for you. The greater number of REFI that is owned will mean a larger percentage of the earned rewards and profits from farming investments.

They have a clearly defined roadmap that outlines the first and second phases, which started with building a 1,000 ETH smart contract farm, ensuring profits for years under the current farming plan. There is even significant investment by DAOs and VCs, which have helped REFI to grow its treasury while simultaneously backing investments.

Their second phase included a full integration into the Binance smart chain, in addition to maintenance of the primary ETH chain functionality. This lowered the minimum number of REFI needed to get rewards, where it’s 10,000 REFI needed, before taxes, on the ETH mainnet to get rewards. On the BSC the requirement is only 1 REFI, making it much more accessible for those who may be micro-investing.

The values of the Reimagined Finance project are relatively straightforward. They represent a way of investing money in $REFI tokens over time, which are then used to share in the profit distribution of the entire program.

REFI makes it easy to park assets and let them be managed over time by the REFI treasury, earning more rewards for longer periods of holding. By making it easy to accumulate REFI rewards by reinvesting the dividends that their farming-as-a-service model creates, eventually creating significant potential income.

As part of future blockchain scaling, the REFI chain plans on scaling into other blockchains that are EVM-compatible. This will allow investors to participate while receiving their rewards in their native token. This multichain expansion will also drive a large upgrade to all relevant securities since you can never be too sure with a token like REFI that aims to reimagine finance.

What Is REFI Token?

The token specifics for REFI are simple and are publicly available. There is a symmetrical 12% tax on all transactions, which is deposited in the REFI treasury, where it is leveraged to increase returns from yield farms. You will only pay the one-time tax when you enter and exit your REFI positions, which gives you the right to collect proportionate distributions from various benefits such as price appreciation and more.

REFI operates in a new sector called Farming-as-a-service, which is poised to offer sustainable and highly accessible income for investors who want to participate in yield farming. The REFI token itself operates as the native proof of ownership and guarantees a portion of all future disbursements.

The share of the potential disbursements or distributions is directly proportional to the overall percentage of ownership the total represents. There will only ever be one billion REFI tokens, so the more tokens owned by one wallet grant greater profit sharing. This is capped at 2% per wallet, however, so those with significant investments may need additional wallets.

If you happen to own 10 million REFI, that comprises 1% of the total tokens and guarantees the holder 1% of all future distributions while the REFI is still held.

REFI is noted to be incredibly secure, having been audited independently by Certik. The funds in the treasury are currently guarded by a multi-sig wallet, which will soon be replaced by the even more secure Fireblock MPC security model.

To increase their security, not only the lead developer but also many of the internal team members have been voluntarily doxxed for the public’s confidence. This means that the odds of there ever being an internal security issue are incredibly low, and risks of fraud are mitigated by having high public transparency with their dev team and internal personnel.

There is a total supply cap of 1,000,000,000 REFI, and the minimum rewards needed are 10,000 REFI on the ETH Mainnet and 1 REFI on the Binance Smart Chain. When earning rewards, each wallet is only allowed to accumulate 2% of the total supply, so heavy investors may find that they operate multiple wallets to leverage multiple 2% rewards caps.

How To Use REFI

The first step is to make sure you have a compatible Ethereum or Binance Smart Chain wallet installed and configured for what you want to do. Then, you’ll connect that wallet to either the Uniswap (ETH) or PancakeSwap (BSC) interface, and select any further preferences regarding your transaction.

In the top box, you will select any existing token you have access to, and select it to swap for REFI. In the bottom box of the same window, you will need to paste the REFI address for the contract chain your tokens are on. If you aren’t sure, you can look it up at this REFI tool.

The next step will be choosing how much REFI you want to buy, ensuring that there is a high enough balance in your wallet to cover transaction fees. If using the ETH network, be sure you take into account the substantial gas fees which can mean making sure there’s an extra 15% in the wallet beforehand.

Be sure you check the settings before you submit anything to ensure that you have slippage set to 15%. This will help protect your finances and transaction by limiting how much the price can move before the transaction makes it to the chain. This can be crucial in times of high volatility by protecting the user against significant changes in the asset or contract price in the time it takes the transaction to hit the chain.

Once you have done that, you will need to confirm the transaction and commit it to the chain. When you are ready, click swap, then click confirm swap to confirm and submit the transaction. Once this is done it will bring up the transaction to be confirmed with your chosen wallet, this is your last chance to double-check your wallet balance and factor in the quoted gas fee, and finally confirm the final transaction in the wallet.

Once the contract hits the chain you will officially own REFI and will begin to accrue rewards at the prescribed rate based on ownership. Once you do earn some rewards or distributions, they will show up in your official REFI dashboard in either the ETH or the BNB area, depending on what chain your assets are invested on.

Here they will not only be able to be claimed as ETH or BNB and will be dropped directly into your wallet, as a wallet to wallet transfer. Your rewards can also be claimed directly as REFI tokens, increasing your percentage of tokens held even further and with more speed. The only downside to this is that when you claim your rewards as REFI, they will end up being a little less than claiming them as ETH since there will be a Uniswap operation to change from ETH to REFI.

For those that are already set up on Uniswap or PancakeSwap, buying REFI is as simple as either buying your REFI directly, or swapping from any other ERC20 token that is on the ETH Mainnet, or any BEP20 token that is hosted on the Binance Smart Chain. This means if you’re already a token holder, you may be able to be a REFI holder even faster than any other way.

One of the primary factors that help REFI stand out is its tendency to be decoupled from the rest of the crypto markets since it is representative of farming returns. The overall returns will still be largely dependent on both price appreciation as well as the growth of the farming investments, since those gains are not intensely linear they can be difficult to predict, but since they grow exponentially those who are seeing returns should see substantial returns.

Another factor that sets REFI apart is the simplicity with which new investors can get started. Not only is it a simple process to get the account created, but it’s simple to fund with any compatible wallet, meaning a new investor can be up and running in minutes.

The hard-coded limit of one billion REFI tokens will keep them from becoming too devalued, and the tax on transactions will ensure that the project is always being reinvested. The tax will also keep the tokens from being monetized too easily and used in any significant transactional capacity since the tax burden would be too great. This helps keep it focused on being an investment and farming tool.

The team behind REFI is incredibly qualified and has a robust skillset. One creator attended one of the most prestigious engineering schools in France and has obtained several other advanced degrees as well, in subjects like mathematics. There is also experience working with a tier-1 bank in the EU, with a strong profit and loss record.

One of the lead developers was an honors graduate from one of the top 3 universities in the UK, then went on to have a successful career in investment banking for the next 11 years. He has experience trading equity derivatives, options, futures, and even directly provided counsel and advice for executives including CIOs. He is a recent entrant into the DeFi space but has shown that he is ready to make REFI the next big thing.

For those looking to get involved in smart contract investing, but may be a little dissuaded by the sometimes highly complex world of crypto and decentralized finance. DeFi doesn’t have to be intimidating, and all the tools you need to make some effective decisions are provided by the REFI dashboard.

You will be able to quickly participate in the process of not just buying REFI and holding it, but also keeping it as a proof-of-stake, and accumulating rewards long into the future. Even small investments now can lead to incredible benefits once the rewards you earn help you earn even more rewards. This is how you can end up with significant income streams with only a little bit of effort.