Rollups are a new process to help the Ethereum blockchain handle large amounts of transactions. Due to being one of the most popular blockchains, they handle millions of users a day. Ethereum is planning on rolling out a 2.0 version sometime in the future. However, until then, they need to rely on other ways to process transactions faster than the main blockchain can. 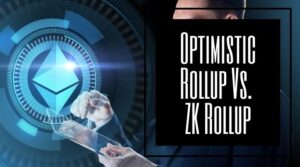 The Ethereum platform has a few ways to reduce transaction times, such as sidechains and layer 2 scaling. Layer 2 scaling is the newest and is where Rollups come in. Optimistic and ZK Rollups are the two most common of all the options, and have some significant differences that make one more preferable in certain situations.

Keep reading to learn more about Rollups, and the differences between Optimistic Rollups and ZK Rollups.

What Is A Rollup?

Rollups were created for the Ethereum blockchain. Ethereum is one of the biggest blockchains for cryptocurrency. However, at their peak, they are only able to handle about 14 transactions per second. This may sound like a decent amount, but when you think about the fact that Ethereum gets an average of a million users per day, it is easy to see how the transactions can easily pile up.

Even if only a fraction of users make only one transfer a day, the blockchain can start to fall behind. So to combat that, a second scaling layer for the blockchain was created. Rollups are what was created on the layer 2 design.

This layer 2 scaling is called such because it takes two steps, or layers. The first is when a set of transactions is moved out of Ethereum’s main blockchain. Then the data is moved into a secondary chain along with the blockchain, which is the second layer.

There are a few other programs that use this layer 2 scaling like Rollups, but they aren’t as possible as they don’t allow for the large transaction limit as Rollups do.

These Rollups allow for a much faster processing time, able to handle over 2000 transactions per second. They do this by rolling up all of the transactions into one large one, hence the name “Rollups”. This is more effective than sidechain methods, as they are just as secure as the main blockchain, while also not requiring the gas fees or the time to handle each transaction.

There are a few different kinds of Rollups available. Currently, however, ZK Rollup and Optimistic Rollup seem to be the two being the most used. Though they serve the same purpose, their methodology for handling and checking the authenticity of the transactions are a little different.

ZK in ZK Rollup stands for “Zero-Knowledge”. It is called this because it takes all of the knowledge of transactions from the blockchain and combines it all into one transaction that it then sends the receipt back to the main blockchain.

The receipt that it sends is known as SNARK (Succinct Non-interactive Argument of Knowledge).

Like all Rollups, ZK Rollup allows for faster transaction times and cheaper transactions as the gas fees for each are much cheaper than ones on Ethereum. There is also no loss in security and the decentralization benefits are still present.

However, while ZK Rollups do have faster transaction times, the withdrawal times are still slow. This is thanks to the way the ZK Rollup checks for fraud. Users that create Rollups are also the ones in charge of searching for fraud. Since every transaction must be checked, a lot of times, it may take a little while before a withdrawal is allowed.

It is to be noted that with withdrawal times being delayed, this is generally by a few minutes to a couple of hours, compared to a week or two with Optimistic Rollups.

How ZK Rollup’s Transactions are Check for Fraud

They are held responsible for only allowing honest transactions through. If they do not report the truth, their stake in Ethereum (ETH) can be slashed. This helps to keep people honest and only real transactions to go through.

Though this sounds unsecured, the system is reportedly so effective that even if only one person was online and monitoring for fraudulent transactions at a time, it would still be effective.

Optimistic Rollups work very similarly to ZK Rollups during the actual transaction process. They move transactions over, roll them all up into one large transaction.

Where they start to differentiate is that Optimistic Rollups sends the transactions back to the main blockchain without sending the proof of receipt.

Optimistic Rollups are still faster than Ethereum’s MainNet, though not nearly as fast as ZK Rollups. They currently average around 100 transactions per second but can go up to 500 with the proper system rework.

How Optimistic Rollup’s Transactions are Checked for Fraud

Main Differences Between ZK and Optimistic

The way the transactions are handled and verified is the main difference between these two Rollups. Where ZK Rollups rely on heavy user input to make sure there are no fraudulent transactions, Optimistic Rollups work by assuming everything is working properly unless confronted.

To put it in more familiar terms, ZK Rollup relies on the belief that people are guilty until proven innocent. On the other hand, Optimistic Rollups assume that people and transactions are innocent until proven guilty.

Optimistic Rollups do have a bit more of a security risk though. They are likely to be fine as long as it is on a small scale and has only low transactional value. However, if it scales to compete with ZK Rollup without improving security, they risk an attack from anonymous users that can report transactions falsely without having the threat of their stake slashed.

Both of these rely on users being honest with transactions. This is done by only allowing users that have a stake in Ethereum to vote on the honesty of transactions. That way, if they report falsely, they are liable to have their stake slashed and lose out on a lot of their profits.

There are some other significant differences as well, though the security design is the most important.

For example, withdrawal periods take much longer with Optimistic Rollups, as there has to be time for someone to find any proof of fraud. Usually, that grace period is about a week or two. ZK Rollups do have some delay, but it is much less than that of their competitor, ranging on average about 20 minutes and may even get down to 1 minute soon.

Gas fees with ZK Rollups are often a bit higher as well, as the SNARK system does take quite a bit of computer processing. The technology is a lot more advanced as well. On layer one, the gas costs are the same, but after that, ZK starts gaining the lead in high gas fees.

Scalability and Transactions per Second (TPS)

Which Rollup Is Better?

Just thinking about efficiency and security, ZK Rollup is a much better system. If it works as it is designed to, the system is efficient and quick. It is much faster than Optimistic when it comes to withdrawal times as it doesn’t have to have a waiting period to verify whether or not the transactions are fraudulent.

However, ZK Rollup requires a lot more computational power and relies on having a lot of users. For smaller platforms that don’t have a lot of people that can process the transactions, Optimistic Rollup can be a lot better.

As ZK Rollup promotes, they can work theoretically with just one user to check the transactions, but that would slow down the process quite a bit. While it still might be a bit faster than Ethereum’s normal system, it wouldn’t hit the 2000 transactions per second that it could.

However, when you start handling a large number of people coming through and making transactions, ZK Rollup does best. It is more scalable than Optimistic Rollups.

It is unlikely that one will ever completely take over, and they are probably going to coexist for a while until something better comes into play, so using one or the other is a viable option for any platform or DeFi.

Are Rollups the Way of the Future?

Ethereum struggles a lot with high gas fees and low transaction processing times. Rollups were created as a way to combat this. However, Ethereum is also planning to roll out Ethereum 2.0. Depending on how well it works, Rollups may be useless in just a short amount of time. However, until then, they seem to be the best option available.

Rollups aren’t perfect. Since there are a few different options, there are some communication issues, as some platforms use ZK Rollups, others use Optimistic, and some use even other Rollups.

Since they use separate but parallel blockchains, it can make it hard for every DeFi platform to communicate as they could if they all used the main blockchain on Ethereum. That doesn’t mean that Rollups won’t be used by DeFi platforms, but that there are still some communication issues to work through.

For how much congestion they remove on the main blockchain, though, it is worth dealing with some communication problems until a better solution comes out.

Another issue is that Rollups are still pretty new. Though they are in theory very secure, they haven’t faced a real threat or test yet to see how it handles real-world application. Some experts think that they may not be as safe as they claim, but there isn’t much way to tell right now until people try to fraud the system.

Many people find ZK Rollups to be the clear winner. For a little more processing power, they handle many more transactions at once and thoroughly verify every transaction that occurs. However, they need a lot of users to be able to work effectively. Optimistic Rollups are better for smaller platforms that don’t have a lot of users to verify the system.

However, Rollups are still a fairly new process. They are made to work in the short and medium-term, just until Ethereum can create its second version. Many DeFi platforms aren’t sure about using Rollups yet and prefer to use the traditional method, despite being slower and more costly.

There is no doubt that this is an exciting time for the cryptocurrency world, especially on the Ethereum Platform, where growth is happening at an accelerated rate due to Rollups and the creation of Ethereum 2.0. It will be interesting to see how they come together in the future, or if Rollups quickly become obsolete with the new design.