Every business needs scalability options. The problem is that scalability quickly gets expensive and having a solution that allows for it costs far more than you can likely afford. The Ethereum network still seems to struggle heavily with this particular grasp on things and you end up spending a ton of money for transactions. For some reason, the company can’t seem to get it together on this front. 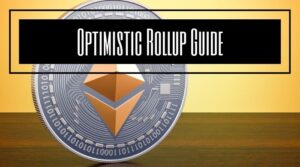 Optimistic rollups are supposed to be the end-all to the situation and the tool to provide scaling and prevent congestion and overly high fees. Ethereum Optimism is turning to optimistic rollups to help create a solution and many of us are curious as to whether it’s going to be the solution of choice.

The end goal would be to transition from sharding to optimistic rollups or find out how to appreciate the best of both worlds. Check out this optimistic rollup guide for all the details you could need.

What exactly is this optimistic rollup that we speak of? It’s a tool and it’s all about scaling. This tool falls into the category of level 2 scaling. This means that it provides a network that falls underneath the first layer. It’s almost like a backup or an addendum to the level 1 scaling piece.

The two levels work together so that performance is better overall. You get to run contracts at full scale, but they are secure through the Ethereum network. They simply work better because of the second layer that is part of the design.

If you are at all familiar with Plasma, you might compare the design behind Optimistic Rollups to Plasma. It’s not exactly the same but the basic concept works very similarly so it might make it click with you.

When you think of optimistic, you think of something positive, right? That’s essentially why this name was chosen and used for the design.

Optimistic refers to bare minimum data that has absolutely no proofs included. It assumes that there is no fraud involved, which is overly optimistic. Then Rollups are used because the transactions in the chain are rolled up into a bundle for cost savings purposes and a major reduction in hefty fees.

We could spend a lot of time going into deep detail about how this works. Instead, let’s just cover a basic overview that still gives you the details you really need to understand Optimistic Rollups.

A blockchain needs things like storage, computation, and bandwidth to serve a practical purpose. In the world of Ethereum, some of these things are lacking. This is where the costs add up and Optimistic Rollups roll in. You get the resources without so much extra cost.

What creates the rollups are sequencers and adjudicators. You also need the Optimistic virtual machine as part of the overall design. You’ve got three layers and many of them overlap.

Layer 1 is just the beginning. It’s actually the largest layer because this is where most of the magic happens. Layer 2 is the backup but then you have a third layer, which is where layer 1 and layer 2 overlap together.

Layer 1 houses the chain contracts and the chain storage containers. Certain data runs through here and will process out to anyone if allowed. The cool thing about the containers is that you can limit data to the necessary person in the puzzle, so anyone doesn’t get everything in the process, adding some security.

Building on layer 1, you also have fraud proof coordination. In this section of layer, the data runs through the fraud proofing. There is storage, verifiers, managers, comparison tools, and more. Then the items deploy and transition. If the transaction is going to be applied, it will move to “layer 3”, which is really the layers 1 and 2 crossover. It’s the middle layer.

There may be further things needed before the transaction is applied though. Eventually, they all move to the crossover layer. Some just have to go through added levels within this layer. Even the fraud trigger proofs will run through manager and to a specific interface.

We realize this seems out of order but layer 3 is really a layer that integrates between 1 and 2. It’s a middle layer so this is where it fits in the process. This is the OVM implementation. OVM is Optimistic Virtual Machine. Here is where fraud identifiers get stored and potentially pushed out.

This is also where an applied transaction will push through to the execution phase. It heads into CVM and directly to the safety checker to be implemented and used. This layer is fairly small, but some really important things happen here, which is part of the Optimization rollups that integrate things together for bundling or rolling up.

In layer 2, this is actually the receiving layer. It’s the layer that catches the overflow and executes the rollups. Bridge contracts are here once they pass through layer 1. You also have OVM Execution, Pre-deployed contracts, and account abstraction contracts.

Essentially, this is where the magic really happens.

The items are rolled up into layer 2 for wrapping up the process and creating that bundle that is Optimistic Rollups.

It all makes sense, right? Some transactions never actually make it to Layer 2. It’s just the rollups that need to move here. The smart contracts if you will. If there is no rollup necessary, everything happens on layer 1 and it’s complete.

The things that need to rollup do so. The Sequencers are what send the rollups there so that the transaction can be officially executed with the entire bundle in play. Anything that goes to Layer 2 must run through Level 1 processes and be checked for fraud. That’s the Optimistic portion before the rollups happen.

What Is the Point of Optimistic Rollups?

With the process, your transactions bundle up into one. But the final transaction is still placed in order. Those orders are entered, and they roll up to be bundled. The design of Optimistic rollup still moves your order to execution. It just bundles it with other orders to bring overall costs down.

Every order has its place in line and when the execution happens, that place is maintained. The entire rollup is executed by the sequencers and done so according to the rules. Of course, foul play is always watched for and then handled accordingly.

The point of Optimistic Rollups is to allow for the scaling of the bundle of orders. With the rollup feature, they all pack together and can optimize at up to 100x above the original Ethereum chain base.

The end result is saved costs, reduced congestion. And a solution that makes a lot of people happier with the process overall.

The Validity of Sequencers

What makes people the most concerned about Optimistic Rollups is the concern for fraud. But between the optimistic layer and the rollup layer, the fraud is supposed to be identified and tossed out.

If you remember in layer 1, we talked about the fraud identification. This is a period where the transactions in the chain are all reviewed and analyzed. The Sequencer simply enacts the transactions but there are several protocols to walk through to weed out the potential problem areas.

When a batch first gets rolled up for execution, there is a period integrated for disputes. If someone within the batch has an issue or another party notices something off, they can issue a fraud proof. In the fraud proof, something can be deemed invalid.

The dispute period is limited so that no party can just make up a dispute way down the road. This allows the rollups to continue moving and won’t affect other parties in the rollup in a negative way.

When the fraud proof is published, the root of the transactions in the rollup are all reviewed. They review the state roots with the actual rollup to find discrepancies and then take action from there.

The sequencer is ultimately the processer of the rollup. They compile the bundle and then issue the execution request. Think of it like trusting your financial advisor to make trades on your behalf.

The difference is the platform is for Ethereum rather than your Apple stock, but you can use the comparison to understand how this works. The sequencer is ultimately creating a block transaction through their portal.

You provide the payment for your transaction, and it issues through the sequencer. You rely on the sequencer to get you the best deal and to do so properly. They are the go-between in the transaction.

The sequencer is handling multiple other “traders” in their blockchain, which is where the Optimistic Rollup begins to take shape.

Let’s take a closer look at how the Optimism Rollup process actually works. It’s a quick process but it has many working parts in the process. All of those working parts are primarily digital so it just happens in the background of the request.

This is just the basis of the process. As we mentioned, there are a lot of inner workings in each step, but this is how a rollup moves through to the executed transaction.

The Benefits of Optimistic Rollups

There are a lot of benefits to this approach. The most notable benefit is a substantial reduction in cost, particularly where a blockchain with multiple transactions are compiled. This allows the sequencer or aggregator to scale and not have to remit excessive funds for each request. Instead, it’s calculated on the state root and split among the transactions.

Optimistic Rollups is really all about adding some flexibility to the transaction. Rather than singling out every transaction, a rollup might include 2,000 total transactions. Can you see the difference? This means up to 2,000 transactions with each entry as opposed to working only through layer one and maxing out at 10 transactions per second. It gets bogged down much too quickly.

The data is all right there on chain so no outside data provider is needed for the processes.

The Downsides of Optimistic Rollups

Of course, there are downsides to anything like this. Understanding those potential downsides is valuable so you can attempt to mitigate or work around them.

If you compare Optimistic Rollups to things like Plasma, you find it’s still pretty limited. But considering it’s a major step up from Ethereum layer 1, that doesn’t really draw you back all that much.

The other potential downside is that while there is a fraud proof process, the transactions are answered too optimistically. It just assumes there is no fraud and then there is the potential for a problem later in the transaction if fraud is found.

Learn to Use Optimistic Rollups

Optimistic Rollups can certainly provide an advantage in some areas. You just need to learn the ins and outs and then integrate the rollups into your applications. There are different networks that can help to accomplish this so familiarize yourself with the options before you move forward.

The benefits of Optimistic Rollups are most received when you understand how the process works and how to use it to your advantage. The second layer in the rollup makes a significant difference overall.

John S. Logan has been working with cryptocurrency for nearly as long as it has been available on the market. With a professional background in the finance industry, he believes that blockchain technology, cryptocurrency, and decentralized finance play an important role in the future of the world.