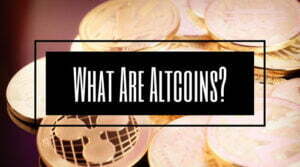 That’s the end of the article in the minds of some people, but there are many different types of altcoins to choose from and not every one of them aspires to be Bitcoin. There are literally tens of thousands of different altcoins–pushing above the 14,000 mark at press time and surely more to come.

And how does Bitcoin measure up to that 14k worth of altcoins? Depending on what source you choose, the answer could be that Bitcoin still dominates with more than 50% of the cryptocurrency coins available to buy, sell, or trade.

That leaves less than half the available crypto (at press time) for the other 14,000 coins to represent. Naturally, it’s a mixed bag with that other 50% or less depending on what options you choose.

Aside from not being Bitcoin, that is…but how do they do it? Some altcoins use a different model entirely to mine or otherwise obtain their coins, validate transactions, create blocks, etc. Some altcoins actively seek a bit of “daylight” between themselves and Bitcoin by offering new or alternative features such as low fluctuations in pricing, the ability to execute a smart contract, etc.

But not all coins are created this way–some prefer to mimic Bitcoin or aspects of it for their own mining operations, buying, selling, etc. When an altcoin is created or maintained in this way, it often may appear to “ride shotgun” (our term) with the ups and downs of Bitcoin (for better or worse). But as a coin grows and matures it’s possible to slide away from that scenario.

Utility Tokens can be employed to trade for services on a network that accepts them–you could also use tokens to pay network fees when permitted or even to claim rewards.

Mined Altcoin is the practice of minting a new altcoin using the blockchain–solving problems and creating blocks generates new altcoins; this approach has been used in the past by ZCash, and others.

Mining these coins and how it is done may sound a lot like the practices behind Bitcoin and you would not be wrong–at least in terms of the broad general description. There is also a practice known as “pre-mining” where some coins are stockpiled ahead of an initial public offering.

Stablecoins are the logical response to one of the basic criticisms of cryptocurrency in general–that Bitcoin and others like it have no real long-lasting investment value because there is nothing of actual real-world value backing up the dollar amount Bitcoin or others are currently selling at.

Stablecoins do have real-world value as they are backed by fiat currency or real-world dollars. Naturally a stablecoin does not have to be backed by U.S. dollars in order to have this valuation and investors should check to see what the supporting currency might be ahead of choosing to invest in the coin.

Why? One of the basic reasons is the exchange rate from overseas funds to U.S. dollars may result in a loss depending on how competitive the U.S. dollar is against that currency.

Security Tokens are a form of crypto investment that may seem close to the types of trades made in traditional stock markets. They may provide returns similar to the classic type of stock market investing you might be familiar with–but the twist is that the stock may be converted to tokens on the blockchain owned by the company offering the tokens.

Meme Coins are often viewed as a popular, faddish type of investment seen in a less serious way but can also be exploited via social media depending on circumstances.

Some point to the example of Dogecoin (created, according to Forbes.com by two engineers as a bit of joke) as the leading example of a meme coin but some sources also remind us that the meme coin label could also be used to describe any altcoin in the months leading up to an IPO or other event that needs some hype.

Dogecoin has increased in value some five thousand percent according to some sources, but there is equal criticism that the coin could be used as part of a pump-and-dump scheme. This is true for many coins and not just Dogecoin but it’s a strong reminder to do your homework and make your investments carefully.

What To Remember About Altcoins

It’s not safe to buy into the hype about any crypto opportunity including altcoins without doing your due diligence the same as for any investment opportunity. Just because a coin is not Bitcoin does not mean it’s somehow better, or without the same kinds of risks. Indeed, altcoins may carry an elevated risk because these are less popular than Bitcoin. Remember the number of crypto coins in the marketplace and how Bitcoin is responsible for over half of them?

That translates into some stiff competition for the others and not all of that competition is as scrupulous as you need them to be.

That is why it is very important to treat crypto like ANY investment and review both the coin and the company offering it. What is the reputation of the crypto and the people behind it? Have there been any scandals (recent or otherwise) worth noting?

And it’s important to look at the history of the altcoin, too. What’s the 52-week moving average of the crypto you want to invest in? In some cases, the coin may be so new that it doesn’t even have one.

And that’s where the speculation and risk start to come in. It’s wise to commit to an on-paper investment in altcoins at first while you are still new to the processes–what do your pen-and-paper trades look like compared to the real-world performance of a given altcoin? It’s smart not to risk your investment money until you have answered as many of your upfront questions as possible.

Partnering with a trusted person who also trades may help–you’ll definitely want to take advantage of the experience of someone who has made some early mistakes in the crypto world and can pass that wisdom along to you.

Cryptocurrency represents a highly speculative type of investment trading. With the exception of stablecoins, there is no real-world value for any cryptocurrency–it’s all investor enthusiasm. Which is great, until it isn’t.

And a smart investor should take that information and let it inform their entire investment approach to virtual currency whether it be Bitcoin, Ethereum or other altcoins.