What is Web 3.0 and how does it rival Web 2.0? To answer those questions we must examine these iterations of the Internet and compare them with the “original” Web 1.0 of the 1990s and early 2000s. Today, we consider Web 2.0 to be “the Internet”. What came before and what is next?

A Very Brief History Of Web 1.0 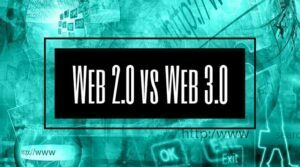 The International Journal of Research and Scientific Innovation reports the term “Web 1.0” was first coined in the late 1980s, but other sources contradict this, saying that in 1989 Tim Berners-Lee actually used the term “World Wide Web” to describe what we refer to here as Web 1.0.

It was meant to facilitate a number of things, communication being one of them but also (later) it would enable commerce without the need for a physical, brick-and-mortar location.

The software that powered the World Wide Web was placed in the public domain in 1993. Some refer to the earliest iterations of Web 1.0 as the “read-only web” or the read-only Internet, but over time that has obviously gone the way of the Dodo.

Web 1.0 was full of early versions of websites, media delivery systems, even digital art repositories. In the early 90s, memes were becoming a cultural norm even though few knew to call them such.

The earliest e-commerce platforms and communities found a home in Web 1.0 including eBay, MySpace, America Online, and Geocities. Some Web 1.0 operations still exist–LiveJournal, for example, is still running after all these years.

Some view the end of the dot-com bubble in 2001 as the birth of Web 2.0. While the rampant speculation, abuse of startup funds, and no-product business plans did collapse spectacularly during that year, the internet itself did not.

And the survivors of the dot-com bubble found themselves operating in an environment ready to find new consumers and businesses. In spite of the crash, people actually took e-commerce seriously.

In the wake of all that, the Web 2.0 conference was created, and there were serious discussions over whether Web 2.0 was just marketing hype that rebranded the Internet in general, or if there was some major shift in utility for the Internet that warranted such a culture shift (at best) or nomenclature shift (at the other end of the spectrum).

You may not find any wholesale architectural changes from Web 1.0 to Web 2.0 (after all, the Internet is built on decentralization), but technological advances in routers, web design, internet service providers, and other aspects of the web typically filter into the online mainstream in the drive to get more, faster, and more efficiently delivered content and data.

Web 2.0 is typified by e-commerce, social media, smart devices, online multimedia sharing, and cryptocurrency. It can be viewed as a “disruptive” factor for physical retailers, cinemas, terrestrial radio stations, and local retail.

What is the next phase of development?

In the same way that Web 2.0 posed an existential and real-world commerce threat to businesses that don’t or can’t evolve with the times, Web 3.0 potentially brings that home to roost, as it were, with older versions of e-commerce.

Spurred by the rise of the gig economy and fueled by the enthusiasm of investors and consumers alike, web 3.0 includes more transparency in coding, a more complete decentralization of commerce and investing, plus the ability to remain more or less anonymous in transactions you participate in.

Is there shiny new internet architecture supporting all this? Yes and no. Blockchain is a great example of a project-level innovation that threatens to revolutionize a large chunk of online commerce. It’s something that, like the Internet itself, began as one thing and quickly evolved both in terms of utility and sophistication into something much bigger than it was intended to be.

One potential benefit of Web 3.0 decentralization? How websites, blogs, and e-commerce “lives” online. Thanks to the current centralized HTTP address system, all sites are housed in a static location. But using Blockchain technology, is it possible to create these destinations and store them in a more decentralized way?

Web 3.0 dangles that tantalizing concept as well as the idea that personal data including your browsing, smartphone calls, vehicle use and more will be worth far more in the realm of Web 3.0.

Add to that the potential to exercise greater control over that data and it’s easy to see that Web 3.0 is something that could bring much greater utility for the end user. But Web 3.0 isn’t without risks.

In the same fashion that hate speech, hacking, cybercrime, and other practices found a relatively easy “in” to Web 2.0, Web 3.0 brings more of the same vulnerability for personal data and credit accounts but in a more decentralized fashion. That is something to anticipate in your own personal security practices. Especially when investing in crypto.