What are the biggest crypto scams? Some crypto scams are pump-and-dumps, others are Ponzi schemes that feed some investors cash or crypto at the expense of others until the entire scheme comes tumbling down. Others are sophisticated hacks exploiting bugs in a platform or network. 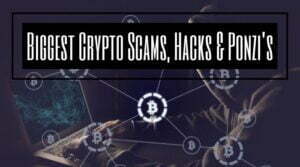 For every famous scam like those we list here, thousands more remain in obscurity with the potential to rip off the unsuspecting and the clueless.

Famous Crypto Scams You Should Know

OneCoin Ponzi Scheme (Est $4 Billion/2014-2016): One of the most infamous and one of the biggest, responsible for losses totaling in the billions. A Ponzi scheme some reports say is actually still going, the initial scam was closed by the authorities in 2017.

Founder Ruja Ignatova disappeared or went underground after operating the scam which claimed that a new cryptocurrency, “OneCoin” was available for mining, buying, and selling.

But OneCoin did not have a blockchain or payment method. One of the primary operations of the scam was to sell “educational” information as part of a multi-level marketing scheme where new traders were incentivized to bring in other investors. The company was suspected of a Ponzi scheme and other illegal activities after it claimed OneCoin was legally recognized by the Vietnamese government, which Vietnam denied.

Bitclub Network Ponzi Scheme ($722 million/2014-2019): Bitclub Network was a crypto-mining Ponzi scheme featuring a “can’t lose” system designed to mine Bitcoin more efficiently or with greater profitability. The system in this case may actually exist, but not in the hands of Bitclub Network according to multiple sources. BitClub Network was a fraudulent scheme that solicited money from investors in exchange for shares of purported cryptocurrency mining pools and rewarded investors for recruiting new investors into the scheme.

Suspects were charged with wire fraud associated with BitClub Network activities between April 2014 and December 2019.

Bitfinex Hack ($72 million/2016): In 2016, 119,756 bitcoin, worth about $72 million at the time, was stolen. In a series of over 2,000 unauthorized transfers, money was stolen from Bitfinex users’ wallets. The stolen bitcoin is claimed to have been traced to a New York-based couple, Heather Morgan and Ilya “Dutch” Lichtenstein who have both been arrested and charged with money laundering offenses. In February 2022, the Department of Justice (DoJ) made a breakthrough in seizing more than $3.6 billion worth of Bitcoin from the Bitfinex hack. The story got even crazier when it was revealed Morgan was a self-described rapper named “Razzlekhan”, “a bad–s CEO and female rapper.”

Bitconnect Cryptocurrency Scheme ($2.4 billion/2017-2018): Described as a multi-level marketing Ponzi scheme, some $4 billion was stolen via claims of having an “unbeatable” system for investing in crypto. Any guesses as to whether the system actually existed? These fraudsters also ran a bogus Initial Coin Offering called BitconnectX.

Plexcoin ICO Scam ($20 million/ 2017): Plexcoin promised its investors returns up to 1,354% within 29 days. Published reports mention Dominic Lacroix, Yan Ouellet and Sabrina Paradis-Royer being accused of false statements including promising those 1000%-plus returns.

The SEC went after Plexcoin operators, accusing them of having stolen $20 million. A grand jury indicted three Plexcoin operators on securities and wire fraud, and the defendants agreed to pay a million each in penalties.

QuadrigaCX Theft ($215 million/2019): QuadrigaCX was a trusted crypto exchange in Canada, with a founder who had private key access to some $250 million CND worth of crypto. The founder and the crypto disappeared. Some believe in a faked death and the most frustrating-for-some detail (as reported by Vanity Fair) in the case is that a large amount of crypto that disappeared was stored in cold storage wallets. Those wallets, in theory, should not have been accessible. But the money in those wallets disappeared anyway.

Netflix produced a documentary about this story titled “Trust No One: The Hunt for the Crypto King.”

Thodex Scam ($2 billion/2021): Thodex was Turkey-based crypto scheme that dealt  in hundreds of millions of daily cryptocurrency trades. One day, the Thodex platform posted an announcement that the company would be unavailable temporarily due to a “sale process”. Thodex never reopened, the founder disappeared with millions, and Turkish authorities made dozens of arrests. Thodex’s founder, flew to Albania, taking $2 billion of investors’ funds with him.

Polynetwork Hack ($610 million/2021): An undisclosed attacker hacked a smart contract of the network, transferring the equivalent of roughly $610 million USD (mainly in Ethereum, Binance Coin and USDC) and moving them to external wallet addresses. the hack was made possible by a mismanagement of the access rights between two important Poly smart contracts. Amazingly the hacker returned all of the funds while saying that putting the coins in a “trusted account” was a way to highlight the bug. Poly Network even took to calling him “Mr. White Hat.”

Wormhole Crypto Hack ($320 million/2022): Wormhole, one of the most popular bridges linking the Ethereum and Solana blockchains, lost about $320 million in a hack. The attacker exploited a vulnerability on the Solana side of the Wormhole bridge to create 120,000 so-called “wrapped” Ethereum tokens for themselves.

Tornado Cash: A weapon of choice for crypto hackers and scammers

Tornado Cash provides private and anonymous transactions for Ethereum and ERC-20 tokens by breaking the on-chain link between source and destination wallet addresses. A perfect solution for someone wanting to move stolen assets. It was used by hackers who swiped $34 million from Crypto.com and by the crypto personality “Sifu” who was involved with the Wonderland project who turned out to be the co-founder of the failed crypto exchange QuadrigaCX.