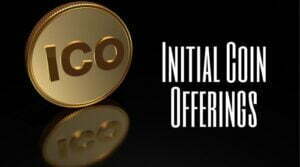 An ICO differs greatly than an IPO in many ways (including the regulatory aspect) but for many investors the ICO can be an exciting moment–if the coin debut manages to capture the interest of enough traders and collectors.

What Is An Initial Coin Offering?

One of the big differences between an IPO and an Initial Coin Offering? Getting started. You don’t have to sell public shares of stock in order to start a company–many small businesses never offer shares of stock, preferring to stay privately held.

If a company’s owners decide they want to offer stock and raise money doing so, they are subject in America to the rules of the Securities and Exchange Commission, the IRS, and other governing bodies.

An IPO is not something you can simply accomplish and be proud of. There are many legal hurdles to clear and compliance with federal law is required in order to offer shares of stock in a company.

With an Initial Coin Offering, it’s much different (see ICOs and Federal Regulation below for additional clarification).

Starting with the existence of the coin itself. In the planning stages of an ICO, the project may or may not be underway in some form and the age of the project may or may not be a factor when planning the ICO? Why? Because it takes time to develop a coin–the drafting of a white paper for a coin project alone must take into account the following issues:

Unlike a traditional IPO subject to regulations, disclosure statements, and security requirements, an Initial Coin Offering is unregulated in that anyone can do it if they have sufficient resources. There are no regulatory hoops to jump through at press time, though that is subject to change at any time via federal law, court rulings, etc.

One other big difference between an IPO and the Initial Coin Offering? An ICO may have some form of other utility aside from being bought, sold, or traded. It may be associated with a software project or service.

Earlier, we mentioned that Initial Coin Offerings are not regulated by the SEC, IRS, or other agencies in the same way that IPOs are.

However, that is NOT to say that a federal agency won’t step in if an ICO begins behaving or doing business in a way that IS federally regulated. In other words, if or when an Initial Coin Offering (which is not regulated like an IPO) begins doing business in a manner by which companies ARE subject to regulation, the government may get involved.

That may be too nuanced for some, but the bottom line is that the government takes a dim view of companies that don’t comply with the current laws but still behave in a similar fashion to those who ARE subject to them.

Because Initial Coin Offerings aren’t dealing with a lot of compliance requirements, it’s easy for any third party to set one up and pretend to do business as a legitimate operator. If you find an ICO you are interested in, you should do your research on that company to learn the history of the players involved. How long have they been associated with blockchain or virtual currency operations?

If you have difficulty locating a person within a specific project with a “crypto resume”, you might want to look elsewhere. Projects that have no identifiable subject matter experts or those without crypto experience should be viewed with extreme caution. It’s also a very bad idea to take your investment advice in any way from celebrities and social media personalities on Twitter.

Ask yourself about the investing competence of the influencers or famous people trying to give you advice–do you really want to put your hard-eared cash into a speculative financial investment recommended to you by someone who does karate kicks for a living?

That is not hyperbole. Bad movie actor Steven Seagal was fined by the SEC (more than $300,000 according to a Washington Post report in 2020) after plugging crypto to his fans without disclosing to them that he was being paid to do so. Not a good look for anyone trying to convince you to part with your cash for a highly speculative investment subject to a high risk of loss.

Another example is the Centra Tech scam. Investopedia reports that Investa Tech’s ICO raised some $30 million in 2017, but a court case revealed this ICO to be a scam. Two celebrities, the boxer Floyd Mayweather and a performing artist named DJ Khaled promoted the project to their followers, some of whom may have taken investing advice in good faith without stopping to wonder if a professional boxer is really the right person to be taking high-risk investment tips from.

Always research the project you are considering, and make sure there are clearly defined goals, terms, conditions, prices, and other details. The more vague and the fewer details there are, the more wary you should be–a lack of clear information is a red flag in a wider range of areas including investments.