What is An Initial Coin Offering or ICO for short? It’s easy to consider an ICO as something similar to an Initial Public Offering or IPO, but what is the reality? 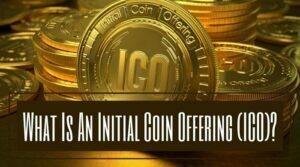 The first ICO is said to have occurred in 2013, attributed to Mastercoin. Ethereum had its own ICO in 2014 and those two offerings arguably opened the floodgates for investors and enthusiasts for any other virtual currency to participate in similar options.

According to the Securities and Exchange Commission (the SEC), ICOs are offered “as a way to raise capital or participate in investment opportunities”.

The SEC official site adds that virtual currencies offer new and exciting opportunities for speculative investment, ICOs “bring increased risk of fraud and manipulation because the markets for these assets are less regulated than traditional capital markets”.

The key to understanding Initial Coin Offerings is to know a bit about how traditional investments work in addition to how modern decentralized investing like crypto works.

How An Initial Coin Offering Can Work

The actual procedures will vary, but in general, an initial coin offering can be as simple as writing a white paper that describes the investment opportunity, plus details including the number of coins or tokens reserved for those who started the campaign, the expected value of the tokens or coins, the duration of the ICO, and other details.

This white paper can basically get distributed among potential investors, posted on a central platform or exchange, and the purchase of the coins offered can be done via the execution of a smart contract that is recorded on the blockchain. There is a very entry-level type of activity here compared to what it takes to offer an initial public offering of stock in a company in the more traditional manner.

How else do ICOs differ from initial public offerings?

An initial public offering is, according to Investopedia, the “process of offering shares of a private corporation to the public in a new stock issuance”. An IPO can be used to raise funds and attract shareholders.

An IPO is a complex thing and is subject to a variety of federal regulations. One good example–there are federal guidelines that require potential investors to be notified in situations where an entity known as a Special Purpose Acquisition Company or SPAC raises funds through an IPO.

An SPAC cannot go public without observing certain rules that prohibit the SPAC from engaging in merger talks without investor disclosure. And that’s just one aspect of this government-regulated process.

By comparison, an Initial Coin Offering or ICO are not automatically considered securities. They are not necessarily regulated by the SEC–UNLESS the ICO meets certain conditions. In those cases the initial coin offering is indeed regulated by the Securities and Exchange Commission. What does that mean?

For starters, if an ICO meets the requirements, it must register with the SEC or the operators must apply for an exemption. And the SEC warns that those who invest in ICOs that such investing crosses international borders and is not regulated solely by the United States.

When there’s an IPO, the price of the stock offered is established through what Investopedia describes as “due diligence” which basically means performing an analysis of a company, its competition, the structure of management, how share ownership is determined and much more.

By comparison, an ICO is a cross-border, cross-jurisdictional activity that is not centrally regulated (but federal regulations may apply to ICOs that meet the criteria as mentioned above) and may not have the same amount of preparation or due diligence invested.

Pros and Cons of ICOs

Many sources including the SEC warn of investment scams related to the purchase of traditional stocks including those made available during an initial public offering. The risks of traditional investing include Ponzi schemes where victims are recruited and provide investment funds for the schemer’s recommended stocks.

The investors assume the money is going into actual investments when in reality the money paid is often distributed to a different investor disguised as a return on the investment. That payout is actually bait to get the investor to spend even more.

There are other traditional investing risks including pump-and-dump schemes that involve the hyping of an investment that isn’t actually worth as much as the hype would suggest.

And those are just two of the risks associated with traditional investing. With ICOs all of these risks exist, too. The difference is that when you pull scams in traditional investing you are subject to federal prosecution for defying a set of long-established federal laws. With an initial coin offering, you are afforded no such protection generally speaking. At press time there is precious little federal involvement in cryptocurrency, which makes it far easier to run a Ponzi scheme or a pump-and-dump operation in the world of cryptocurrency.

Investing in cryptocurrency carries more inherent risk than traditional stocks, bonds, T-bills, etc. The lack of regulation is an advantage but also a big liability in terms of your recourse should you fall victim to a scam, an unscrupulous ICO operation, etc.

Carefully research the parties and players behind any initial public offering or initial coin offering before you invest. Such research is quite important in the best of times, but when investing in crypto it’s even more important to know who you are dealing with and sending money to.