What is a crypto bubble? To understand this concept we need to examine how other “bubbles” work and why.

What Is An Economic Bubble? 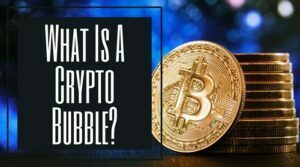 A crypto bubble, similar to any financial bubble, is described by some as a willful refusal to acknowledge a “speculative surge” in the price of an investment, with the dose of “reality” about the bubble setting in only after that bubble has popped.

That idea also applies to plenty of other economic bubbles including a real estate bubble in Japan that ran roughly from 1986 to 1991 before a major reckoning kicked in. And who could forget the housing market crash from 2007 in America?

The dot-com bubble in the 1990s is a lesson some crypto investors don’t pay any heed to, and to their own peril. Back then some dot coms with major investment capital provided through investors wound up producing absolutely nothing aside from an official website. The term “vaporware” doesn’t specifically apply here but it’s in the spirit of what some of these startups wound up producing.

Others actually had business models (Pets.com was one) but failed spectacularly for any number of reasons. Yet for a time, the money kept rolling in for such dot coms…until it stopped.

The bubble burst leaving many holding the bag after wildly speculative investments which retuned nothing but vapor in the end for users who weren’t quick enough to divest themselves once the end was near.

Dot-com bubbles aren’t the only ones–there are plenty of economic bubbles we could use as examples, including the once-passionate marketplace for Beanie Babies, Magic The Gathering cards, and many others.

Once packed full of investor money and interest, Beanie Babies aren’t the golden ticket they once were–people seemed to simply lose interest.

Not all of these examples are dead and gone entirely–some still live on to this day. But the glory days for Beanie Babies is likely over–at least from an outsider’s point of view, and we certainly won’t see a return to the days when people would put their actual household trash in a box and sell it for a profit on eBay…because there were people who would actually buy it, often for the novelty of having done it–sound familiar?

A crypto bubble is not much different in spirit than any of the other economic bubbles or speculative bubbles mentioned above. When ANY commodity or investment opportunity becomes so over-hyped that there’s a near unquestioning market for it, the bubble’s burst can’t be too far away–even if that metric is measured in decades rather than months or years. What are the warning signs of any bubble, but especially a crypto version?

The “Shock of the New”

Bitcoin is a great example of something some investment writers refer to as “displacement” where something new and exciting comes along to grab attention–that can be a circumstance such as low interest rates, or it can be something more tangible like the creation of a virtual currency that can be bought or sold.

A Sudden Explosion In Acquisition

The “boom” of crypto can be identified by its wildly rising value. Momentum builds and builds, and so does investor excitement.

Some third parties may try to hype the subject of the boom and create even more investment or attention. People succumb to the time-worn idea of FOMO (Fear of Missing Out) and some begin (for better or worse) dumping more of their liquid cash into the hyped opportunity which can lead to…

The “High” Of The Bubble

Investor euphoria will hit an all-time high, with FOMO running high and enough media or social media attention to continue attracting new investments into the subject of the bubble. Here’s the part of the trend where it feels like the party will simply not stop.

Some investment writers point to a specific type of logical fallacy that may be at work here–the concept that no matter which way the investment winds up heading that there will ALWAYS be a market for it.

During this phase, caution is thrown to the wind, as asset prices skyrocket.

Valuations reach extreme levels during this phase as new valuation measures and metrics are touted to justify the relentless rise, and the “greater fool” theory—the idea that no matter how prices go, there will always be a market of buyers willing to pay more—plays out everywhere. But when the bubble bursts, some investors will learn the hard way.

Cashing In On Chaos

Chaos might be an extreme word to use–but the smart investors riding the bubble will at some point decide that too much fun has been had, the value has risen too much or won’t rise again, and start selling off their investments.

In the cash-in phase there are many, many less-experienced or just-plain-not-very-smart-about-investing types out there who won’t recognize the profit-taking.

They will simply keep buying as others are eagerly selling. The profit taking can go far enough to push things to the next level (see below) but how long until even the most thick-as-a-brick investor recognizes that something bad is about to happen? There is no way to tell in a definitive, fact-checking type way that indicates the bursting bubble is imminent.

Panic At The Trading Counter

At some point, even the laziest investor recognizes that things are going south. Once it is clear that the bubble is dying or about to burst, the panic selling begins.

Some will try to liquidate no matter what they are paid for the investments, some may find themselves being told they owe large sums of money due to margin calls or through a rapid devaluation of the investment. This panic is often fatal to the investment–or it can be.

How To Beat The Crypto Bubble

It is as simple as a single word, and that word is DIVERSIFICATION.

The speculative investor who over-invests in a single opportunity is setting themselves up for a major failure once the bubble bursts. It really is that simple. The phrase “don’t put all your eggs in one basket” is the GOLD STANDARD for smart investors. If you put too much of your available cash into a bubble (and yes, Bitcoin is having its own bubble) and that bubble bursts…you get the idea.

Simply do not over-invest in any single type of financial opportunity whether those are stocks, bonds, crypto, Beanie Babies or Cheez Whiz. Putting too much money into any one area makes you more risk-susceptible. Some people LIKE that amount of risk. But some of those investors can afford to lose every penny of the money they put into bubble-type opportunities.

If you cannot afford to lose your crypto investment…consider yourself warned about diversification.