FOMO, or the Fear of Missing Out, is a term that Merriam-Webster identifies as having surfaced for the first time circa 2004. The online dictionary describes FOMO as a general fear of missing out (hence the acronym) or being left out of something fun or interesting. FOMO is a big reason why people invest in a new coin, NFT or digital asset. FOMO is a part of human nature which can be profitable experience or a painful lesson in FOMOing all in.

Before FOMO rose to popularity, Singaporeans had already named their own version “kiasu”. Taken from the Chinese dialect Hokkien, “kiasu” translates to a fear of losing out but encompasses any sort of competitive, stingy or selfish behavior. 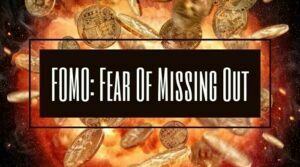 There is a related acronym relevant to our discussion of FOMO, and that is FUD, or Fear, Uncertainty, and Doubt. Both of these are used in a wider sense, but both crypto FOMO and FUD are commonly used in discussions about investing in cryptocurrency. Why?

Because like any investment situation, when buying, selling, or exchanging cryptocurrency it is a very bad idea to be pushed around by the emotional factors described in the acronyms.

If you make investment choices based on the emotions of fear and doubt, you run a greater risk of losing your investment than if you choose to make calm and unemotional choices about your investments.

When you research the fear of missing out as it relates to cryptocurrency you will find a lot of general advice about staying calm, reminding yourself that you can’t be involved with every good opportunity that comes along and that cryptocurrency as a market has its narrative defined by the winners, not the losers.

But what about more specific advice? How do you avoid the Fear Of Missing Out / FOMO syndrome when planning and executing your cryptocurrency transactions?

The first thing you need to understand about investing, in general, is that FOMO is inescapable in some ways. That does not mean YOU will necessarily experience a great deal of it, but other investors WILL.

That can be an advantage if you understand how that works and how to spot the trends associated with FOMO, panic buying or selling, etc.

People are tempted to overlook the idea that cryptocurrency in particular is an investment that relies heavily on investor enthusiasm rather than inherent value. That is why it’s so important to be mindful of the fear of missing out or the elements of FUD (fear, uncertainty, doubt).

Many investors have to learn how to overcome the emotional aspect of investing, and many have to learn as they go. That creates pitfalls for some and opportunities for others. The fear-driven buyer or seller of crypto creates an opportunity for less emotional, more deliberate investors.

The Opposite Of FOMO

What is the opposite of FOMO? Technically speaking, it’s JOMO or the Joy of Missing Out. Dictionary.com describes JOMO as:

“…a feeling of contentment with one’s own pursuits and activities, without worrying over the possibility of missing out on what others may be doing:”

But for our purposes, JOMO is not the answer. It’s actually a different view on investing–one highly recommended by some financial advisors. It involves leaving emotion completely out of the equation and taking the most pragmatic approach possible.

Do some online research on the phrase “emotional investing” and you’ll find many articles advising you not to let your feelings interfere with your business transactions. The opposite of FOMO is to pay attention to the fundamentals of investing in crypto and respect the power of emotional trading as an advantage (you don’t do it, other investors do–that is the advantage).

Fomo Labs (FOMO)
Fomo labs is an NFT and metaverse ecosystem that utilizes the $FOMO token at the base layer level. This include incorporating the token into Fomo lab’s staking pools and using FOMO token as a fee system with FOMO Lab’s native NFT marketplace platform (The Avenue). FOMO token will also be used as an access token for the FOMO launchpad, enabling the participation into industry leading pre-sales on the Binance Smart Chain

ForeverFOMO (FOREVERFOMO)
$ForeverFOMO is a price-elastic token with adjusting supply, moving towards the price of Bitcoin. Different then just a normal pegged token/stable coin, rebases make price-elastic tokens into synthetic commodities with fluctuating values and supplies that gradually stabilize. Ultimately, rebases are designed to be tradable and potentially extremely profitable.

FOMO Baby (FOMOBABY)
$FOMOBABY is a launchpad for fully vetted projects on BSC with Seed Funding (Private Sale), and Presale. Holders of $FOMOBABY tokens will be eligible for Whitelist on fulfilling some basic criteria set by the sponsored projects. A fee of 1.5% of the Total Raised Funds will be charged on presales held on launchpad which will be used to BuyBack and Burn $FOMOBABY, thus pushing its price upwards.

FomoETH (FOMOETH)
$FomoETH is a community-driven blockchain ecosystem focused on NFT Technology. It operates on both Ethereum and the Binance Smart Chain Network, and primarily configured to work as the main token for our flagship project, NFTagram.

FOMO Pot (FOMO)
A jackpot token on the binance smartchain which aims at surprising its holders with a lottery.

FOMO APE (FOMO APE)
Not to be confused with $APE Coin, $FOMO APE is a decentralized financial payment network that rebuilds the traditional payment stack on the blockchain. It utilizes a basket of fiat-pegged stablecoins, algorithmically stabilized by its reserve currency FOMO APE, to facilitate programmable payments and open financial infrastructure development.

These coins do not represent recommendations to purchase or connect to their apps. Use caution and DYOR (Do Your Own Research).

Fomoverse
Fomoverse by Pak is a collection of 1,234 NFTs that live on the Ethereum blockchain.  Given away for free, the project sold out in nearly two minutes, and encompasses only a white diamond inside a black background. Fomoverse was a cryptic, unexplained drop that is still shrouded in mystery. Launched on October 22, 2021 via a barrage of tweets. Centered around the idea of FOMO (fear of missing out), Pak has referred to Fomoverse NFTs as “parcels” and collectors as his “partners,” and introduced the idea of a 50/50 secondary sales split between himself and collectors.

FOMO MOFOS
A series of 8,008 unique collectibles by renowned artist Jasper Wong. FOMO MOFO is inspired by the colorful world we love and grew up on. The FOMIES come in a wide range of traits with hundreds of variables that make each one special. FOMO MOFOs are a part of a family and a community with future projects being funded by the FOMIE Community Treasury and future collections.

FOMO Dog Club
FOMO Dog Club hails from the island of Formosa. It is a collection of 777 randomly generated Shiba Inus living on the Ethereum Blockchain. NFT holders get exclusive access to a dedicated Discord server: “Apollo 88” and many future benefits.

Forever FOMO Duck Squad
Part of Highstreet world and these NFTs are 7,500 procedurally generated and 500 celebrity inspired ducks on the Ethereum blockchain, designed to have utility in our metaverse immediately.

Aside from the many crypto projects that are centered around the word FOMO here are references in pop culture.

You should decide how much risk you are willing to tolerate as early as possible and stick to that decision until circumstances permit you to increase that risk tolerance. Some choose never to select more risky investments, which is why some will never sink money into Bitcoin, Ethereum, or others.

Others–including some who suffer from FOMO–will invest in riskier options including cryptocurrency. Those who have a higher risk tolerance can afford to lose some money in a potentially high return investment like Bitcoin. But those who have lower risk tolerance who follow the same path? These investors are more likely to suffer from FOMO and FUD.

And there’s the lynchpin issue for some–many are victims of fear of missing out precisely because they are less risk-averse. These are people who may not have the same amount of investment funds to deal with–a smaller pool of money to use for Bitcoin or Ethereum–but may worry they are going to miss out on the opportunity of a lifetime.

The fear of missing the golden ticket can, for some, override their aversion to loss of funds and make them invest in things they might not otherwise consider if taking a more pragmatic approach.

But the opposite can be equally valid—what happens if you are invested in a virtual currency that is starting to feel iffy or is starting to get negative talk on social media?

When Elon Musk made a casual reference to Bitcoin being wrongly valued, it created a panic among some in the Bitcoin community–some more emotionally-driven investors rushed to unload their coins and the value of Bitcoin plunged for a time. Do you sell when others are panicking, too?

Some look at the chatter and commit to divesting. Others may read the situation with an understanding that this, too, is part of a cycle of confidence that may not play out into the “death spiral” of a particular cryptocurrency.

But sometimes the fear is justified, and occasionally those who made an emotional decision about buying in or cashing out get lucky.

Specific Advice For Beating FOMO And FUD When Investing

When you choose something to invest in, whether that’s stocks or cryptocurrency, it pays to set a trading and exit strategy ahead of time based on facts and metrics such as the 52-week moving average value of the investment, its performance in the most recent quarters and market conditions overall.

If you do not set buy and sell stops for your investments–ANY investment where those procedures apply–you set yourself up for more emotional decision making. Choose in advance when to sell if things go poorly in the market–you want a stop-loss strategy for crypto the same as with any other investment.

Beware of over-leveraging yourself in any investment as this can lead directly to emotional decision-making. If you cannot afford to lose the funds you put into cryptocurrency, don’t invest. Wait until you CAN. This can go a long way toward helping you make more pragmatic and less emotion-driven choices.

Choose when to stay and when to go BEFORE you get pushed around by the emotional aspects of investing and it will be much easier to stick with your resolve and not make a choice driven by fear or doubt.

Here are some more crypto slang terms you need to know.

We're already in #GoblinTown so might as well look the part with this latest pickup. Wanna Poak Dat?

GameStop has launched an #Ethereum wallet for #crypto and #NFTs. The wallet is now available as an extension for Google Chrome and Brave.

It's #BitcoinPizzaDay! Here's a look at how crypto has evolved.
.
.
#Bitcoin #cryptocurrency #crypto #coinfomo
https://coinfomo.com/history-cryptocurrency/