What are Nouns? For this discussion, we are talking about crypto and not grammar. According to the official site, Nouns are an experiment designed to improve “the formation of on-chain avatar communities”. 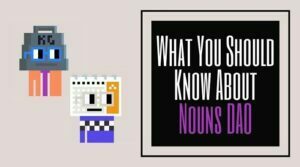 The Nouns project is essentially a type of Decentralized Autonomous Organization where NFTs, commerce, and investing intersect. One new Noun artwork is generated per day, and one Noun NFT is auctioned off at a time. That’s a different approach compared to some NFT projects which feature mass-produced NFTs which are dropped or otherwise made available in bulk.

Nouns NFTs function in a similar manner to other types of NFT art projects like the Bored Ape Yacht Club or CryptoPunks–you are buying pixel art or digital art NFTs–but with a few extra ideas thrown in for good measure. The people behind Nouns try to set themselves apart from other projects with some unique features as we’ll explore below.

To understand Nouns, we have to examine something known as a DAO–a Decentralized Autonomous Organization, which for outsiders to cryptocurrency sounds like a generic name for a type of organization. In reality, it is that but DAO also refers to one entity that got its’ start on the Ethereum blockchain back in 2016.

Who Was DAO? And What Is A DAO?

There are two things referred to as a DAO. One was a single entity, while others may tend to use the name DAO the way some refer to any tissue as a “Kleenex”.

The entity known as DAO has an important place in crypto history. The original Decentralized Autonomous Organization was a group formed in 2016 by developers who basically wanted to create an automated method to enable crypto sales and trades.

The DAO project has been described as a venture capital fund (albeit with a comparatively experimental approach) that used a crowdsourced process that ideally allowed anyone to send money to anyone else no matter where on the globe they are located.

But DAO experienced a major hack in the same year it debuted and the project lost more than three million ETH as a result. The DAO project ultimately disappeared, having been delisted in September of 2016. Some published reports indicate there was a plan to return to the playing field, so to speak, but at press time that has not happened.

The entity known as DAO may have failed, but the CONCEPT of DAO (the Decentralized Autonomous Organization) lives on in the form of projects such as Nouns.

Nouns is the name of an “experimental attempt to improve the formation of on-chain avatar communities” according to the official site. Nouns involves public domain NFT art, using Creative Commons licensing for the artwork itself.

There is a “generative art” aspect to this project–something once pioneered by musician and artist Brian Eno with something called 77 Million Paintings. That project also featured “generative art” created by computer with inputs from the artist as the guide.

The artwork itself is referred to as a Noun, and when you buy one via auction, you become a member of the Nouns DAO. One Noun is created every day and auctioned “trustlessly” every 24 hours. This is intended to happen in perpetuity under ideal conditions. The Nouns are sold, the funds are sent to a Nouns account, and the end of any current Nouns auction triggers the next one.

The people who created the Nouns project have chosen to set aside for themselves one Noun for every ten created over the first five years of the project.

The money that goes to the DAO treasury as a result of these auctions is regulated using a fork of Compound Governance, the money and project voted on by members who own Nouns. The membership and the entire community are decentralized.

When you win a Nouns auction, as mentioned above you become a voting member of Nouns DAO. One Noun is worth one vote in the collective. This ideally allows you to vote to help guide the project’s future. Those who started this project recognized need for a fail-safe measure to prevent Nouns from being hijacked by hackers or malicious actors.

They created a special veto “to ensure that no malicious proposals can be passed while the noun supply is low”. The veto measure is intended to be invoked if “harmful governance” is passed by the collective and the veto is considered a sort of NFT “nuclear option”.