Meebits is an Ethereum NFT project by Larva Labs featuring 20,000 unique characters created by a generative program (sound familiar?). Meebits became part of history in March of 2022 when it was acquired (along with the CryptoPunks NFT project) by Yuga Labs. 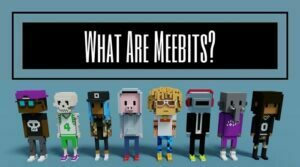 Larva Labs is the company behind Meebits, CryptoPunks, and Autoglyphs. The Meebits NFT project has a unique spin on it compared to some other NFTs; this one is created using 3D voxel art.

Voxel art is a similar thing to pixel art files, but rendered in 3D which is a feature that, along with the owner being provided an OBJ file, lets Meebits NFTs potentially be used as avatars in a virtual world setting.

There were 20,000 Meebits minted and some 9,000 sold out within about a full business day to the tune of some $75 million. There was a large number of Meebits set aside for the owners of other Larva Labs NFTs and the secondary market fell in love with Meebits. One NFT buyer purchased more than 190 Meebits NFTs.

All of that happened in May 2021. Not even a full year after this NFT project’s success, a familiar name in the space decided it wanted to purchase the entire collection from Larva Labs.

Yuga Labs purchased the entire Meebits collection along with the CryptoPunks NFT collection in March 2022. One of the first acts Yuga Labs made after that purchase was to release full commercial rights for all Meebits to the owners.

If you own Meebits, the post-sale terms and conditions of your Meebits NFTs will include updated terms that allow you to create derivative works or otherwise profit from your Meebits and CryptoPunks NFTs the same as any other Yuga Labs project with the same terms.

Yuga Labs purchased the two NFT collections in total, meaning they own the rights, intellectual property, and any remaining NFTs from the two collections that have not been sold. Only the NFT collections were sold. Larva Labs continues to operate and plans more NFT projects to come.

The Future Of Meebits

Yuga Labs talked up big plans for Meebits in its press release about the acquisition. The change of rights means there is an expectation that third-party developers might create more content using Meebits or accepting Meebits avatars as part of the “world”. Yuga Labs promises to respect the legacy of Meebits and CryptoPunks and promises not to “shoehorn” them into other Yuga Labs NFT projects.

It is amusing to some to read talk of Meebits and CryptoPunks being “legacy” collections (the Yuga Labs press release actually uses the term “historic” to describe these two NFT projects) in spite of the fact that these NFT projects are not even decades-old at press time. CryptoPunks launched in 2017, and Meebits got started in May 2021.

There can be nuances to buying NFTs depending on gas fees, and other issues. Research the fees before you commit to buying NFTs. To purchase Meebits, you may need to install the Metamask extension to buy, sell, and trade.

If you are interested in purchasing Meebits you may need to use the secondary market such as the NFT marketplace OpenSea. You will need to have the cost of the NFT plus any associated gas fees that may apply to your transaction.

Meebits have sold for around $14,000 USD. There are, at press time, some six thousand Meebits owners, and the “floor” of the NFT is just under 6 ETH at press time.