Andy Nguyen, who launched the Bored Ape Yacht Club-inspired restaurant, Bored & Hungry, is one of the groups founders alongside Kevin Seo and Phillip Huynh. 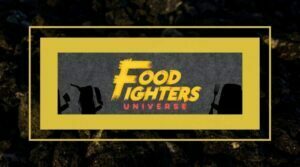 Each NFT purchase will help to develop the world’s first NFT-backed restaurant group, focused on building gathering places in real life (IRL) and the metaverse, while offering utility and experiences for Food Fighters NFT holders.

Food Fighters Universe is the first Food NFT project that will fund the massive expansion of food gathering places in real life and in the metaverse. Allowing for bridging of NFT/Web3 veterans to help gamify and onboard new “normie” communities into the new space.

Each NFT purchase will fund the world’s first Metaverse and IRL (in real life) Restaurant Chain and Gathering Places. 1 Food Fighter NFT = your membership to all special events, rewards, and all Web3 and other IRL perks.

Food Fighters NFTs will grant members access to special events, rewards and perks in Web3 and IRL. That includes tickets and line hopper passes to an annual in-person Food Fighters Festival, along with hidden restaurants created as “Easter Eggs” for the Food Fighter community.

FFU restaurants will be diverse and include many different ethnicities from the Caribbean to American to Asian cuisine and learning about their stories. Chefs will be selected from the teams vast network of restaurant industry contacts.

Decisions such as restaurant locations or menu items will also take place through conversation on Discord, Twitter and other platforms. One of the first major decisions was the Pizza Mascot name which the community voted as Pete Za to beat out other names such as Pizza Pete and Pepper Roni.

Artist frothyoatmilk designed the collection of NFT characters, which will include “Super Foodies” such as pizza, ramen, ice cream and sushi – each with unique rarity traits assigned at random. Ownership and commercial usage rights for the IP (intellectual property) will be given to NFT holders.

One percent of revenue from the Food Fighters Universe NFTs will be donated to food sustainability and world hunger charities, starting with Abound Food Care and Action Against Hunger.

Post-Coachella, early May, with a mint date to be announced soon.