What do Bored Apes and CryptoPunks have in common besides being NFT projects? In 2022, these two formerly separate entities are now one, thanks to the Yuga Labs acquisition of the Meebits and CryptoPunks collections.

Those who deal in investments are no strangers to the concept of corporate investment practices; hostile takeovers, mergers and acquisitions, and other situations that basically have two companies becoming one. 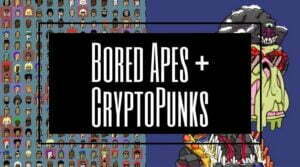 How and why did Yuga Labs (the people responsible for the Bored Ape Yacht Club, Mutant Ape Yacht Club and associated projects) come to own these two collections and what are the implications?

That means that, assuming “full rights” is on paper actually free reign to use the NFTs to make derivative works or otherwise commercially exploit the NFTs.

We have not read the terms of the agreement, but assuming “full commercial rights” includes the ability to make derivative works including films, merchandise, and other things? Some CryptoPunk and Meebits owners may find new potential sources of income from their holdings.

The acquisition of these two collections does not, according to officials at Yuga Labs, change the basic focus of the project. Yuga Labs statements include a statement that Bored Ape Yacht Club remains “the center of our universe” according to Yuga, and that the company “always admired” the CryptoPunks project.

What Does It Mean?

When Yuga Labs bought the NFT collections, they purchased the rights to everything including the intellectual property, the commercial and derivative works rights, the copyrighted artwork itself, and all remaining NFTs that are not owned by others.

There were some four hundred Cryptopunks left, and more than 1700 Meebits. Not bad for a project that got its start some 10 months or so prior to the entire collections being sold.

It’s been reported that Yuga has, thanks to the acquisition, managed to land five NFT projects among those listed in the “top 20” highest grossing to date at press time.

Add to that the fact that the three highest-grossing projects belong to Yuga Labs and its easy to see that this company could be a significant operator in the space if for no other reason (other accomplishments aside) than that it has a major footprint among NFT players.

When it comes to a potential “superpower” NFT, has anything in the crypto world ever gotten as close as this?

Not just the future for Yuga Labs, which at press time included talk of the company opening its own NFT marketplace, but for the entire NFT ecosystem? The sort of trend we might be witnessing here at the beginning might include a wave of acquisitions from other projects inspired by the success of the Larva Labs deal.

There is speculation as to other Yuga projects–some are asking whether new or announced projects will include CryptoPunks or Meebits NFTs, some want to know if derivative collections like those based on CryptoPunks might be affected by the acquisition.

And there was also some speculation as to whether insider trading might affect transactions like these–some discuss a pre-acquisition surge in Meebits prior to the sale going through.

Whether people were responding to rumors, or whether there were indeed some insider moves made during the transition to Yuga Labs ownership remains to be seen, but if the move does manage to be the first of many such purchases, added scrutiny to factors like those is bound to be a part of the process.

And what of Larva Labs, the company that started the CryptoPuynks and Meebits NFT collections? Larva is still in business and the founders have gone on the record saying they will remain active, creating new projects and continuing on the road toward “the future of web3” as the Yuga Labs press release about the sale put it.