What Is KYC? This acronym stands for Know Your Customer and in the minds of some crypto enthusiasts, it runs contrary to the very idea of cryptocurrency. 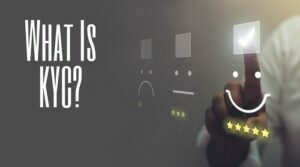 But as we’ll explore below, many others believe KYC is not just necessary, it may hold the key to the future of crypto in light of increased interest in federal regulation in this area. But not all aspects of crypto trading are affected by KYC.

Know Your Customer is not a concept unique to crypto. Banks use KYC processes to ensure they know who their customers are, that the customers aren’t money laundering or performing other illegal activities using the bank’s resources, etc.

KYC verification tools can be as simple as a requirement that all customers provide a government-approved photo ID and it can be as complex as using biometric technology to verify identities using fingerprints, face recognition software, and other measures.

The stakes are high when a federally-regulated or internationally regulated entity does not comply with KFC; there are many regulations associated with Know Your Customer practices.

One report notes that a cumulative $26 billion in fines (internationally) for non-compliance were issued between 2008 and 20018.

What Does KYC Do For Those Who Use It?

Ending the wild west in some aspects of the crypto community has benefits for the overall survival of Bitcoin, Ethereum, and other virtual currencies. In the same way that public perception of MySpace eventually led to a mass exodus from that platform in favor of Facebook and Twitter, the same issues with public trust and interest can apply to crypto.

Trust issues are a major part of any PR campaign, as a good public relations strategist will tell you.

Do you perceive that a certain crypto exchange is run by bad actors, clueless ones, or those who are more interested in charging you fees than your satisfaction as a user? That sort of trust issue is what we’re talking about on a large scale.

KYC is speculated to be an effective deterrent to hackers who might want to exploit more anonymous crypto options. KYC could help shut down ransomware attacks that require the victim to pay in crypto. But it would only help to prevent such attacks where the KYC measures are used. “Unprotected” exchanges or platforms would still be vulnerable.

KYC has another important utility–establishing trust. In the same way that public perception can change the way an investment is bought or sold (at volume, not in terms of technology), it can also change the overall perception of the investment as one to trust or one to be wary of.

KYC becomes more of an issue for cryptocurrency the closer to regulation it gets. Decentralized finance, or DeFi, is less scrutinized in a KYC sense than crypto exchanges.

There is no platform to force to obey regulations, no one to hold accountable, just the buyer and the seller and the public record on the blockchain. DeFi’s advantages (the peer-to-peer transaction with no middleman) are also potentially drawbacks under the wrong conditions.

Platforms or exchanges on the other hand? KYC is a much bigger worry, thanks in part to increasing government interest in regulating them.

Binance announced in 2021 that new customers would be required to provide a government photo ID in order to open accounts. Binance also added facial recognition measures to their BYC procedures.

That sort of transparency may not have come from a purely customer-centric worry about privacy; financial regulators in countries like Japan have tightened restrictions on such operations. No KYC? In some countries that translates into no permission to do business.

Another example that made headlines? BitMeX chose to begin KYC measures in order to get ahead of regulators. This is an example of some parts of the industry attempting to prove it can regulate itself without need for further attention from government agencies.

But the BitMEX play wasn’t successful. The company received notifications of regulatory violations resulting in a settlement of some $100 million between the agencies and BitMeX.

Some adopt Know Your Customer measures only to experience a backlash from privacy purists and those who just don’t want to “re-centralize”. ShapeShift, a “non-custodial” exchange that does not hold its users money for them.

ShapeShift implemented KYC procedures and began moving away from a “no account” system to a signups-required model. Moving toward requiring identification hurt ShapeShift. Some reports say it lost nearly all its users in the transition.

There was a complicating factor; around the time of the shift away from anonymous accounts, the Wall Street Journal made allegations that the exchange was being used as a money laundering option.