What is The Merge and why did this NFT project garner so much attention? The Merge is an NFT project by an artist known as Pak. This NFT art story made headlines in late 2021 because the artwork represented by The Merge’s non-fungible token sold for some $91 million, which one publication declared was “debatably achieving the highest price ever for a work by a living artist”. 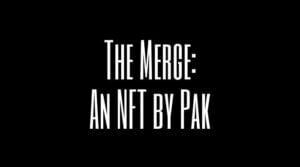 And while that is not necessarily true–American painter Jasper Johns (still living at the time of this writing) saw his painting Flag sell for some $110 million to a private collector in 2010–it is a significant price tag for a piece of art of any kind, let alone a digital one.

What exactly IS The Merge and why do so many crypto enthusiasts care?

Who Created The Merge? A NFT by Pak

Pak is an anonymous artist (Pak prefers the term “creator”) known primarily on social media via Twitter. Is Pak a person, a collective, a bot, or something else? The media tends to treat Pak as an individual and some have interviewed Pak for publication–a hint that Pak is a single person–or at least represented by one.

If you’re getting the idea that Pak is deliberately obtuse about the nature of all of this, you’re on the right track. The world of art–including digital art and NFTs–is rife with things that evade easy contextualization, classification, and labeling.

A good example–the artistic duo Marina Abramović and Ulay, who became infamous for certain types of performance art that blurred the lines between individual creators, gender identity, and personal safety.

Another example can be found in the art collective Guerilla Girls, who stage art happenings 100% anonymously–dressed in gorilla costumes to hide their identities.

Pak is another step in such traditions in the art world; it’s a lot newer to those who don’t know art but love crypto. Pak is known for challenging work using NFTs–one project in April of 2021 as part of the artist’s Open Editions Series called “The Fungible Collection” explored “understanding of value” by offering NFTs with varying degrees of scarcity, uniqueness, and desirability.

Pak made big headlines by selling The Merge, which is a unique type of NFT artwork designed to be a commentary/innovation on more traditional NFT buying, selling, and trading.

The nature of this artwork is essentially an observation of and exploration into the potential of NFTs to be purposed or distributed in ways that challenge the contemporary notion of NFTs and crypto in general.

How? By exploiting concepts of scarcity, uniqueness, and investor enthusiasm to make a unique online work of art that is being debated as a single unique work or a series of smaller works that make up a whole.

The definition is important to some–mostly for reasons of bragging rights. You can’t claim to have one of the largest price tags for a single work of art made by a living artist if the rest of the art community interprets your work as a series of images rather than a single project that is made of the sum of its individual parts. Which is it?

That’s open to debate. For our purposes here, the answer isn’t necessary–but it IS a fascinating discussion.

On December 2, 2021 Pak made a limited number of units associated with The Merge available for sale. At the start of the sale, the price was fixed at below $600 per unit, also referred to in this project as a “unit of mass”. (That descriptor becomes important later on.)

Each unit of mass was increased in price every so many hours–what started off at a lower price point increased in cost as the project carried on, but collectors had the option of getting free units of mass when purchasing in large numbers. But the unique nature of this particular project?

There is a single NFT provided to the buyer but the more units of mass the buyer gets, the more “mass” that single NFT artwork has.

It’s important to note that the limited-time sale of The Merge was in what is called an “open edition”, which in the art world means it was not limited in quantity–there are no signed and numbered editions indicating an end to the series. But the limited-time sale and the issue of whether you are buying an NFT or “mass” is an added factor that makes this art/crypto hybrid rather unique.

The initial sale itself was a limited-time option, but The Merge takes the entire project a step forward with the unique way these NFTs may be traded or sold among collectors now that the sale period has ended.

When you buy The Merge from another collector you are NOT getting another NFT. You instead get the “mass” of the token and the NFT offered by the seller is “destroyed”.

So when you buy The Merge you gain mass, but you also contribute to an increased scarcity of the NFT itself. Does it sound like a game to see who can accumulate the most mass? That is exactly how this project has been described in many reports.

Some reports note that approximately 266,000 units of mass were sold in the The Merge’s public sale to a buyer known as “Silver Surfer”.

Mass isn’t just a unit of measure–when it comes to The Merge; the more mass you accumulate by purchasing, the greater your potential to “evolve” an even more unique edition of what you have purchased. How?

There are 100 of those, with some having randomly assigned color backgrounds and others are issued in very limited numbers with specific backgrounds such as blue.

The more mass you get, the greater potential that your NFT will change background color, and some of these NFTs will be assigned a rarified “permanent class” making them even more collectible and purchase-worthy in the eyes of collectors.

The Merge was sold via a platform called Nifty Gateway and Pak does not seem to be slowing down their work any time soon. The current buzz around this project includes Nifty Gateway co-founder Duncan Foster noting that the project is another “validation” of NFT art as a viable concern that would not be possible without blockchain technology.

As for Pak, funding another project in this vein does not seem to be an issue; Pak’s previous work, The Fungible Collection, (also an open edition) sold for nearly $17 million earlier in 2021. For context, some sources report the highest price tag for a work of digital art previous to Pak’s work included Beeple’s Everydays: The First 5000 Days, selling for just under $70 million at an online auction held by Christies’ in March of 2021.