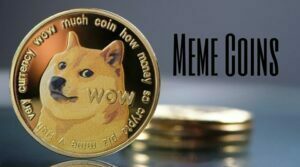 Genetic memes reproduce themselves as far and wide as possible and those which survive do so via the process of natural selection. A social media meme runs in a similar fashion. The “natural selection” in this case is the meme’s popularity. How many “likes” or reposts does a meme get before it goes viral?

A meme coin essentially follows in the footsteps of social media memes. Meme coins, like their non-crypto meme counterparts, rely on the enthusiasm of the public to thrive, grow, and eventually (or instantly) go viral.

Some might argue that Bitcoin is the original meme coin, since it’s also the “original” cryptocurrency as we understand it today. And while Bitcoin is technically NOT the first attempt to establish a sustainable virtual currency, it’s essentially the pioneering version of crypto as we define it in contemporary times.

But meme coins typically start off as jokes, riffs on humorous memes (hence the name), or other casual origins.

Bitcoin was a project that was created in earnest and not as a joke; the spirit of meme coins includes an aspect of surprise–in that any meme coin that becomes a successful enterprise and evolves beyond the joke stage could well turn into a major player in the crypto space.

And that is exactly what happened to what is said to be the first well-known meme coin. In 2013, a digital photo of a dog was circulated as a “dog’s inner dialog” meme. This was commonly referred to as the “Doge” meme. Two software engineers created Dogecoin as a joke and a snarky comment on the growing wave of cryptocurrency speculation.

The joke caught on. The Sydney Morning Herald reported Dogecoin’s total market valuation in 2014 as being somewhere in the neighborhood of $60 million USD. (Editor’s note–that is NOT the price of the individual coins, but rather the total overall value.)

Not bad for something that started off as comedy. Dogecoin had a major spike in value in 2021 and some sources say it occupies a spot in the top 20 coins in terms of market capitalization.

What Are Meme Coins Worth?

The answer to the question above boils down to the popularity of the individual coin. “It depends” is not detailed investment advice, so what is the reality? In general, cryptocurrency sites report meme coins as having low monetary value, at least on an individual level. Meme coins may not have any built-in controls to limit mining or minting of new coins and the numbers will continue to climb.

Meme coins are a bit like vinyl records in this respect. If you have an Adele 12-inch single and 50,000 copies were manufactured, that single won’t be as scarce or as valuable as the same artist’s 12-inch single for a different song that was limited to 1000 copies.

Meme coins in general may have no upper limit to how many hit the market over time and that factor changes how they are potentially valued.

The meme coin that does “burn” some of its own currency to limit the supply will likely do better than the ones that do not. At the time of this writing, meme coins in general feature low prices–one market snapshot of Dogecoin in 2021 had it priced about roughly fifteen cents.

Then there’s the issue with acceptability in the marketplace. Who accepts a certain meme coin as payment? While Dogecoin is likely the most successful on that front, many smaller and less well-known coins may not have as many people willing to buy or trade for them. That factor is an important one to consider if you plan on actually spending your coins rather than trying to sell them back for a profit.

Meme coin valuation can change very quickly. While this is also true of other coins, memes and meme coins thrive on the whims of the market and that’s a force to be reckoned with the farther into crypto investing you go.

Meme coin scams may commonly involve methods to artificially inflate the value of the coin before the scammers dump their holdings and leave the rest of the enthusiastic investors holding the bag as the coin’s value plummets back down to more realistic levels.

This occurred with a coin associated with the popular South Korean sci-fi dystopian series Squid Game. The creators of the coin dumped their holdings after the coin went viral and reached a value of approximately $2,000 per coin.

Like all other virtual currencies, much depends on the basic architecture of the coin project. Is it secure? Is there any regulation on the number of coins produced, and are there safeguards to prevent the system from being gamed in ways that push the value up or down arbitrarily?

Who are the people behind the virtual currency project and are they able to be trusted? The Squid Game incident reveals that those questions are just as important as the other standard queries you should make into any virtual currency fad before you invest.