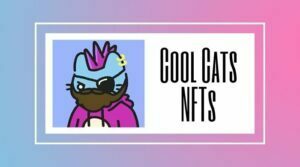 Who Is Behind Cool Cats?

This NFT collection, which features just under 10,000 NFTs, was created by:

The project, like so many other NFTs, got its start around the same time as the Bored Ape Yacht Club in 2021. The initial run was small. Some 300 Cool Cats sold out fairly quickly in a single day priced at .06 ETH per NFT. The price was lowered for successive minting and this NFT project became so popular it began receiving celebrity endorsements. At press time, Cool Cats NFTs were selling at a “floor” of 7.5 ETH on OpenSea.

Those who purchase Cool Cats and Cool Pets NFTs (see below) are considered members of the collective. Owners have a voice in the direction the program goes including specific voting rights for features of future NFTs, apps, and even “breeding” among Cool Cats.

What Are Cool Cats NFTs?

Cool Cats are one NFT shy of a full ten thousand NFTs. Each has traits randomly generated and there are some 300,000 potential combinations of these traits. The cats all feature different hats, faces, bodies, and outfits.

In addition to the planned scarcity (the 9,999 cats available), there is an additional factor–the marketing hype on the Cool Cats site states that “not all cats” are as cool as others. There are varying degrees of “cool” from what is described as “basic level” all the way up to “exotic”.

What Are Cool Pets?

The Cool Pets NFT project is basically a companion for Cool Cats, featuring a whopping 20,000 NFTs created. That number is basically 10K reserved for current owners of Cool Cats NFTs, with the other 10K Cool Pets being offered to the public.

This project describes the pets as being “hatched from an egg” and owners interact with the egg before hatching to influence the variants and help the Cool Pet “evolve” into its “final form”.

This is described as a “gamified” type of NFT that involves tasks, care and “feeding” of the NFT as part of that play. One part of that care and feeding includes the option to purchase chests of items that will further influence the evolution of the Cool Pets you own.

The phrase “We like the cats” is the official slogan of Cool Cats. It’s said to be indicative of the inclusive nature of the project and the structure of the project is designed, like similar NFTs, to encourage a sense of community. When you own a Cool Cats NFT, you are invited to join the project’s Dischord server and members are treated to NFT drops, real-life events, and even non-exclusive licensing for the owners of these NFTs.

Many NFT projects feature the option for investors to use the NFTs for derivative works. This is often offered on a sliding scale and the Cool Cats version of the non-exclusive license allows the owner to use the NFT as they see fit including merchandising and marketing. But the Cool Cats project also reserves the right to do the same thing.