The World of Women project began as four people motivated to bring diversity and inclusion into the world of NFTs, but has since grown to a team of nine. Co-founder and NFT artist Yam Karkai is responsible for the World of Women collection, which has a similar “vibe” as the also-inclusive Boss Beauties project.

In both cases, the presence of a woman-led, woman-focused NFT project is raising eyebrows; Rolling Stone describes the NFT landscape as being largely a “boy’s club”. 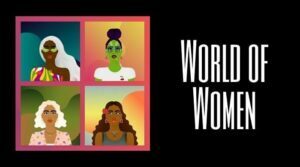 Now, thanks to some ten thousand different NFTs created by Karkai for the project and a whopping $40 million raised in roughly two weeks on the strength of those NFTs, World of Women is a force to be reckoned with in the world of NFT art.

World of Women NFTs do retain the “right of authorship”, which means you cannot claim Yam Karkai’s artwork as your own creation, and the artist also reserves “moral rights” over the artwork which means it cannot be used in ways that hurt the reputation of the artist.

This project also forbids the owner of the NFT from using the artist’s trademarks and other protected “proprietary words and symbols” of the creator.

Purchasing a World of Women NFT may also bring a perk in the form of physical art prints of the NFT, signed by the artist. This offer is conditional; the official site says it will “airdrop up to 100 signed framed prints to token owners. Just own a WoW NFT to be eligible,” adding that for every 1000 “primary sales” ten World of Women owners are selected at random to be shipped a print of the NFT they own.

And, we will explore below, you can print out these NFTs to use in “derivative works” featuring the character you purchase.

Can I Buy World of Women NFTs?

When purchasing a World of Women NFT, you have access to view an 800×800 PNG file, but after purchase the official site promises to let you “unlock its super high resolution 4000×4000 version. You’ll then be free to print the art yourself, and use it for your derivative projects!”

What is a derivative work? You can print a t-shirt, a poster, coffee mug, etc. Other uses could include animating the character and placing it in its own feature or short film.

Like other NFT projects, World of Women perform airdrops of NFTs by “lesser-known, emerging crypto artists from around the world”, placing free NFTs into the crypto wallets of World of Women owners.

Like their contemporaries, Boss Beauties, World of Women has a philanthropic side. The initial sale of thee NFTs resulted in some $2 million in earnings.

Fifteen percent of that was set-aside for future investment in NFT art. Five percent was set aside for charitable work aimed at ending child marriage, and at least one donation was made for a World of Women community member who needed surgery.

In addition to these efforts, the project has held auctions for causes such as Rockflower, an investment fund for women entrepreneurs in developing countries.

Who Buys World Of Women?

Rolling Stone reports that Reese Witherspoon is the first celebrity to switch her own Twitter profile picture to that of a World of Women image, and since then Eva Longoria and Shonda Rhimes have both made World of Women NFT purchases. Other high-profile people who have bought, sold, and traded World of Women include: