What is the Tungsten Cube and how does it relate to NFT? This is one of the more unusual versions of an NFT but all the usual principles that add perceived value to the NFT are there: scarcity, investor enthusiasm, and a unique type of NFT that is making investors curious while some outsiders to the whole experience are left a bit…confused. 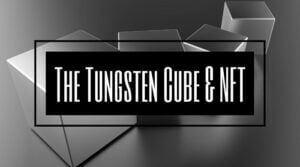 Midwestern Tungsten Service sells tungsten cubes and tungsten spheres. This company sells the cubes at varying sizes and price points from around $30 to well above $3,000.

The company also sells industrial supplies using metals like tungsten, tungsten-copper alloys, etc. Midwestern Tungsten also sells custom-made versions of the cube at sizes specified by the buyer. Some sources report that purchasing the cubes themselves has been a fad for some time on social media sites like Reddit. And orders for the cubes apparently surged in October 2021.

Midwestern Tungsten Gets Into The NFT Business

And then the NFTs began. One such site offered a tungsten cube NFT. The website, appropriately named TungstenCubeNFT.com, offered 500 NFTs for cubes of varying sizes. The NFTs were distributed at random and participating collectors were assigned an NFT intended to be “redeemed for a 100% discount code for a cube of that size”.

At press time, the campaign page has a large SOLD OUT banner. Tungsten cubes are a hot commodity among those who love NFTs in general, enjoy spending money on unusual collectibles that are the talk of many Reddits, blogs, and social media accounts.

But the company that makes and sells the cubes decided to get in on the act themselves, and that’s where the real splash was made in the press. For a time, the company was primarily used by industrial enterprises, but when Midwest Tungsten began manufacturing the cubes in a variety of sizes and prices, interest from collectors took off.

And so, according to the company’s official blog, there was some debate over what size to make the biggest collectible cube they could based on shipping size, and weight plus other delivery considerations.

A 14-inch cube size wound up making the grade, and Midwestern Tungsten decided to mint an NFT that would allow the owner the privilege of “visiting” the cube once per year at the company’s headquarters.

The creators of this particular NFT knew that in order to maintain a high level of interest in this unusual NFT opportunity, some kind of scarcity would be needed to fuel the PR fire. So the 14-inch cube was given its own special room, kept behind closed doors, and NFT owners could not be allowed to “visit” the cube for some four months following the transaction.

So when the “visitation” rules were drafted, the following line was included:

“Subsequent owners of the NFT cannot visit the cube in a year in which the cube has already been visited.”

In fact, the company went on to clarify that the cube would be stored in a room of its own that would be locked and only be accessible by the NFT owner. The cube would additionally not be available to view until 12 weeks after the first sale. With respect to the delivery, its blog noted,

“Burning the NFT will result in shipment to the most recent owner via freight truck, owner will be responsible for alerting Midwest Tungsten Service of the intention to burn and transport after freight drop-off.”

This particular NFT was sold for roughly a quarter of a million dollars (paid for in Ethereum) and at press time the disposition of the NFT or its future use is unclear–under the terms of this NFT option the owner can choose to cash in or burn the NFT and have it physically delivered.

And security around the cube is tight. In order to access it, “unlockable content” is required “for scheduling and proof of ownership required for entry” to the headquarters facility where the physical object is stored.

The tungsten cube is one of the more unique stories emerging from the world of NFTs; some view it as a cynical cash-in on a pricey online fad, but others respect the power of the cube’s uniqueness and appreciate the fun of collecting a one-of-a-kind type of NFT.

Whether or not the cube earns an inflated valuation the way some cryptocurrency and even some art-based NFTs have done remains to be seen.

Investor enthusiasm in areas like these is very similar to the buying, selling, and trading that goes on in the art world.

There may be no Banksy or Damien Hirst behind the scenes of these transactions, but it is entirely likely that figures like those two famous artists (famous for both the work they do and the hyper-valuation of it) may emerge as major players in the NFT scene over time.

And very likely, they may be directly inspired by the unique nature of the tungsten cube.