What is a bull market? What is a bear market? Investing in cryptocurrency can at times be deceptively close to Wall Street-type investments. There are speculators, buy-and-hold investors (people who choose to “hodl”), day traders, and pump-and-dump scammers in crypto the same as for more traditional investing.

And because of this, a lot of the jargon from mainstream investment opportunities either translates or is ported over in ways unique to crypto. 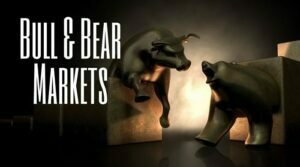 But some aspects of investing in crypto are quite similar to traditional investing, including the concept of a bull market, a bear market, and even the phenomenon known as “crabbing” or sideways behavior in the market instead of a strictly up or down type of trading environment.

Knowing terms like these makes you a better investor. Not because you have some kind of advantage, but because you have a better grasp of how the market can and often does behave. These terms aren’t the key to your financial success, but they can contribute toward making more informed choices about your investments–crypto or otherwise.

What Is A Bull Market?

A bull market is a description of how the trading environment is behaving when the markets overall are rising. If you watch Bloomberg or read Marketwatch, you will see daily indicators of the market and whether it is rising or falling.

A rising market doesn’t really happen in a day, so a single 24-hour period of upward momentum doesn’t necessarily mean a bull market is in effect.

Likewise with dips in value during the bull market–there will be setbacks, there may be some reversal of growth, but single instances of this are not necessarily an indication that the market is about to change. Until it becomes an indicator of such.

That is not terribly scientific, but that is how the market sometimes works in both crypto and on Wall Street.

The bull is about more sustained upward growth. There may be more demand for certain investments than there is supply, prices may be increasing, and the people who get in at the start of a bull market generally tend to profit more than the latecomers.

Your experience may vary in this respect, and our generalization here does not take into account an investor’s experience level or opportunities in the market.

The bull market generally gets its name from the concept of investors being “bullish” on their investing–the tendency to push forward, a “damn the torpedoes” approach that seems to encourage more risk-taking (in certain circumstances) and less conservative investing.

Not all investors will bite, but those who leverage themselves more to take advantage of a bull market do so at the risk of coming in too late, hitting the end of the bull market in general, and some might hang on too long in such conditions and miss out on profit-taking as things begin to wind down

What Is A Bear Market?

Supply will outstrip demand at some stage, and it will be harder to sell a commodity, stock, or crypto under such conditions. The thing many investors want to do in a bear market is to try to predict the “bottom” or the lowest price of the investment.

Once it hits bottom, there are at least two kinds of traders–those who want to scoop up cheap bargains, and those who have been burned and are now dumping investments for less than they paid.

There are other types, but those two are especially relevant when the market takes a downward turn. Some try to “short” an investment by trying to predict when a currency or stock’s price will begin to fall and sell before that happens.

Others may choose not to pay attention to the bear market at all thanks to an investment strategy known as dollar-cost averaging, which requires a set dollar amount of investment on a regular basis regardless of bear markets or bull markets.

Crabbing is the term used to describe a condition where the price of a stock or crypto isn’t rising or falling, but rather simply stalled. The price may be stuck for any number of reasons–a lack of enthusiasm, an over-saturated market, world events, scandal, social media controversy or other issues.

Like bull markets and bear markets, crabbing is not an exclusively one-direction type of movement in the market. There may be up times, there may be down times, but in the case of crabbing, the “middle” is consistently stagnant for a certain period of time.

Crabbing is not a direct contradiction to bulls and bears. There can be bullish crabbing, and bearish crabbing. Some choose to develop strategies that anticipate investing during all these types of market conditions, the tough part for new crypto investors is knowing how to finesse those strategies for real-world variations in those conditions.