The Brave Web Browser was developed by Brave Software as an open-source browser based on Chromium. A big draw for Brave Web is the emphasis on privacy and ad-blocking, but there are also ways to earn crypto tokens using Brave Web, as we’ll explore below. 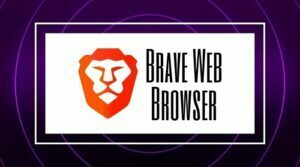 Brave Software is notable not only for the privacy-based innovations it’s keen on developing but also for the attention it has gotten from venture capital investors. In 2016 the company received angel investor funding from Digital Currency Group, Propel Venture Partners, and Peter Thiel’s Founder’s Fund.

A Brief History Of Brave Web

The Brave Software story begins in 2015 when the company was founded (originally known as Hyperware); early the following year the very first edition of Brave Web was released as an experimental version. It wouldn’t be long before project developers refined the browser to include support for Tor plus a private or incognito browsing function.

There were further refinements and even a fork; in the end, ad-blocking innovations by the team and other improvements saw the browser’s efficiency increase to nearly 70 times its former abilities.

In 2021, Brave was working on a search engine meant to return search queries without subsequently recording user data or asking for it. A public beta test appeared in the summer of 2021 and at press time is considered under development.

What makes the Brave Web browser unique? As mentioned at the start of this article, the goal was to create a privacy-centric browser that takes above-and-beyond steps to eliminate ad tracking, cookies, and other third-party monitoring of a user’s online experience.

The Brave Web browser offers a number of security and privacy features including, but not limited to, the following:

In order to use Brave, you’re required to download and install it the same as with any other browser like Firefox, Chrome, etc.

There is a Brave Rewards program that allows users to earn crypto “just for browsing”.

Users are required to download the Brave Browser, click an icon in the address bar to begin, and browse with the option of viewing Brave Private Ads, which are displayed in an image rotation format. Those who opt-in for the ads are offered Basic Attention Tokens (BAT) as a reward. If you decline to opt-in, you can still use Brave Browser features.

The use of BAT is part of a larger move to make digital ads and online content more secure, less prone to abusive tracking processes.

It’s also meant to provide more value for advertising dollars (the browser features “private” ads) by showing fewer ads which are thought to be more effective and targeted based on user preferences (among other things) but, the company claims, without invading your privacy. Brave promises, “Your data never leaves your device”

When earning BAT you can use the tokens to buy or trade where BAT is accepted including cryptocurrency and gift cards. BATs can also be traded for premium content and may be earned not just for viewing the ads in the browser, but also for participating in the Brave Browser project.

Basic Attention Tokens were trading at $1.76 at the peak of trading up to press time. There are some 1.50 billion BAT in circulation and the supply is said to circulate at 100%. The exchange rate is 6,400 BAT for 1 ETH, and the price of the BAT is tied to the valuation of Ethereum, meaning when ETH rises or falls in value, BAT is adjusted proportionally.